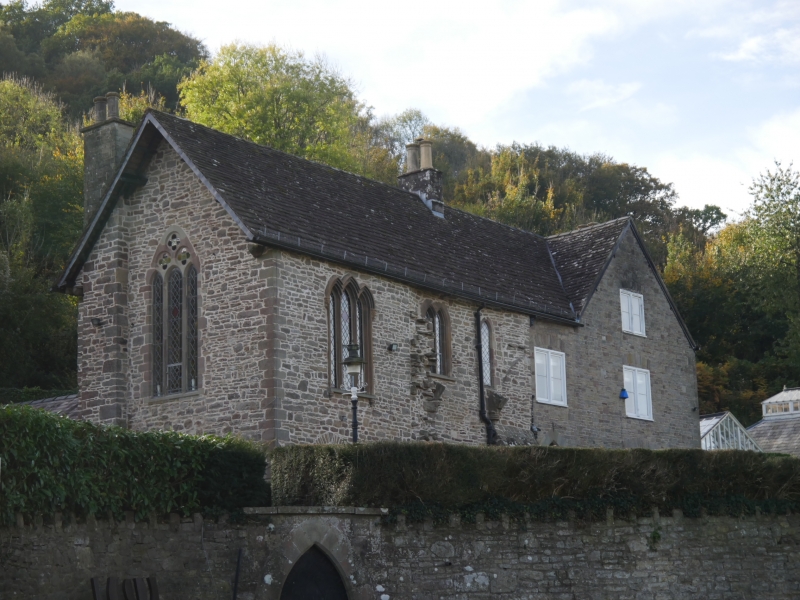 Location: At the junction of the A466 and Chapel Lane and about 200m east of Tintern Abbey.

This house incorporates in-situ walling and features from the Middle Ages, apparently C13/C14 as with the Abbey. The medieval fabric was part of the Abbey Gatehouse, its main entrance from the outside world, and the elaborate windows are supposedly from the chapel at the gate. The good survival of these features suggests strongly that the original part of the building remained in use after the Dissolution in 1539, but the majority of the present house appears to be mid C19, the grey stone as opposed to the earlier pink, and the 'picturesque' appearance of the whole is largely fortuituous. The most famous occupant of the house was John Loraine Baldwin, founder of the I Zingari Cricket Club. He died aged 92 in 1896, and so could well have beeen responsible for the major rebuilding of the house in 1850-60. The house has been little altered since this period other than by internal modernization.

The house is constructed of red sandstone, random rubble for the medieval parts and squared grey rock faced sandstone rubble for the mid C19 extension. The whole is roofed in stone tiles apart from the rear kitchen wing which is Welsh slate. Two storeys, with an attic storey to the Victorian cross-wing, except for the single storey rear kitchen wing.
The south end is the medieval part. The south gable has a 3-light Decorated window which seems to be in-situ and was presumably the altar window of the first floor chapel. To the left of this is a large added external stack in grey stone (the chapel would not have been heated), projecting eaves. The east elevation has medieval stonework to the left hand (southern) half. This has a 2-light window and a door, both with pointed heads, leading to the undercroft, and a large triple lancet, again apparently in-situ, above. Next comes the broken wall of the gateway going up to the eaves, the lowest section is in ashlar and was presumably the gate opening. Then on the ground floor is a 4-light trefoil headed window in grey stone, a Victorian addition. Above this is a double lancet in situ and to the right is a single one. The walling now turns to grey stone and is Victorian, a pointed arch for the main entrance porch below and a 2-light timber casement above. Finally a gabled bay with a door with sidelights, and two storeys above, each with a 2-light casement. There is a stack on the ridge at the join between the medieval and the Victorian work, and another on the return wall of the gabled wing. This wall is otherwise blind above an added conservatory which joins the house to the Dairy (qv). There is a two storey addition in the angle, a single storey kitchen wing, two tall stacks, one in red brick and one stone, also several roof-lights.

Not available for inspection at the time of resurvey but John Newman has written the following:- "The inner side of the E window is exquisitively treated, with shafts having capitals to which trefoiled stiff-leaf foliage is naively applied, and the quatrefoils set within moulded circles. Beside the window, a post-Dissolution chimneypiece, its jambs made up from a pair of many-moulded shafts on many-moulded bases from the pulpitum of the abbey church." (p. 557).

Included at II* as a rare survival of a medieval monastic building in domestic use and with historic interest as a part of the precinct buildings of Tintern Abbey.