St. Michael and All Angel's Church 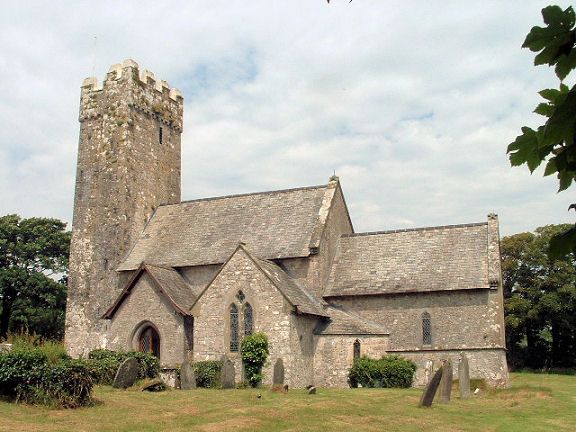 At the N end of Bosherston village.

Exterior: Original limestone masonry in large blocks. Slate roofs with sprockets at eaves. Recently re-roofed. On the N wall of the nave are signs of a lost N porch. Tower probably later than nave, battered at base. Three storeys. Corbelled parapet with crenellations. Louvred belfry openings on all sides. Stairs turret at the SE corner of the tower, also crenellated.

Interior: The nave, tower, transepts and porch are vaulted. The transepts meet the nave each side through a pointed arch, but the tower open directly to the nave. Timber roof in the chancel. Minton encaustic tile floor in chancel with arms of Lord Cawdor. Good east window in Early English style with three lancets and four thin Purbeck marble columns to the inside arches. Stained g]ass 1872, in memory of Rev. W Allen. Modern oak table. Corbels of former rood beam. Square Norman font, scraped. C 14 effigy-tombs in the transepts. Ogee-headed piscina in the S transept, at a low level which indicates the floor has been raised about 0.5 m.