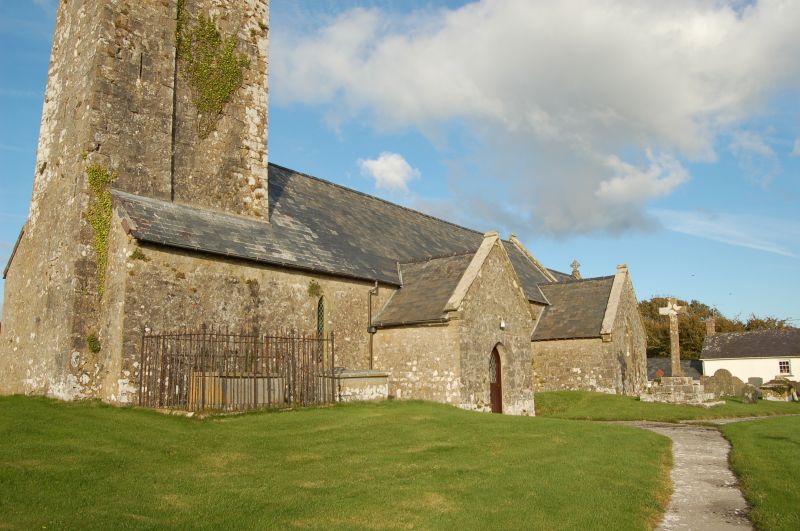 Documentary evidence shows the existence of a church of St Twinnell (St Gwynnog) under the Abbey of Sees in 1259. Masonry in the S side of the nave suggests a C12 date. St Twynell's was restored in 1858 by Lord Cawdor.

Sandstone masonry, partially in large courses (nave, tower), elsewhere in random rubble. Partially rendered at W and N. Slate roofs with C19 verge parapets.
The tower consists of two stages and is built upon the W end of the nave vault; this shows the massiveness of the nave vault. Its lower stage above the nave has a rough vault spanning E-W and window facing E. Its upper stage has a steep corbelled dome with slate covering, hidden by the parapet. Louvred belfry openings to N, E and S. Stairs turret in the SW corner of the tower. The tower parapet is on corbels and there is a similar corbelled detail, with less projection, at top of the stairs turret.

Unusually long and narrow nave, approx. 17m by 5m, with a tall pointed vault. Blocked remnant of the N transept. This and the S transept are vaulted and open full height to the nave. Porch also vaulted. Squint from the S transept to the chancel.
C19 enlarged chancel arch in two orders. The chancel has a timber roof with scissor beams. Vestry N of the chancel with large stone chimney. Three-light E window. Other windows throughout restored in lancet style. Chancel floor in Minton encaustic tiles with arms of Lord Cawdor.
Undecorated Norman font of cushion type, on a short pillar with base.

Listed II* as a retaining major fabric from the mediaeval church.