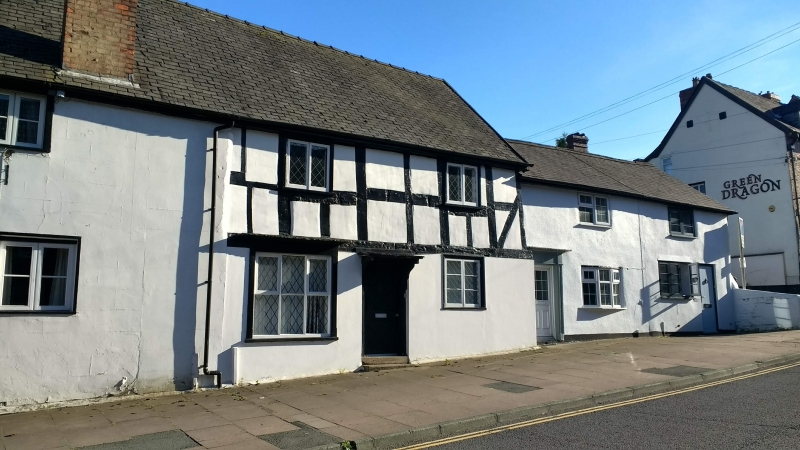 Location: In the centre of a short terrace E of Church Road.

History: Probably originally a single house of C16 date, which was later subdivided (with a flying freehold), and used for a time as a pair of shops. Now a pair of houses.

Exterior: Timber framed structure partially covered by lined-out render (the timber framing exposed in the upper storey and rear of No 6: irregular square panels with tension brace at angle). Slate roof with brick front wall stack to No 5 (a similar stack removed from No 6). Massive rear wall stack partly within short brick rear wing. Each has doorway towards centre (the doors themselves renewed), flanked by 2-light casement window to right (renewed in No 6), and 6-pane shop window of mid C19 type to left. No 5 has 2 small 2-light casements close-set to first floor: the similar windows on No 6 are more widely spaced and have been renewed in early openings.

Interior: The interior layout was modified on the subdivision of the original house, which appears to have bisected the main hall of what was probably a 3-unit building. No 6 retains the rear wall fireplace of the hall, with a cambered bressumer, and heavy chamfered and stopped axial and transverse beams, with stop-chamfered joists. The previous existence of opposed entrances and a partition, with 3 small rooms to its right, suggest that it also included the service end of the hall. Stop-chamfered joists and an axial beam survive in this section. Upper floor has queen-post trusses exposed in gable ends, and curved braces to central truss, with stop-chamfered purlin.

Although the buildings have been altered, they retain some of the character of an early timber-framed house of considerable interest.