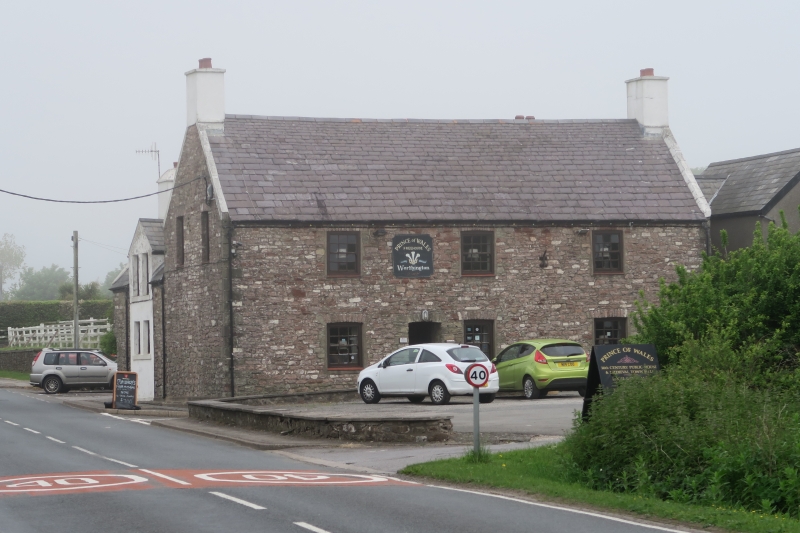 Location: The former borough of Kenfig lies W of North Cornelly, on the edge of the sand dunes. The inn stands facing S, with the gable end against the road from Maudlam to Porthcawl.

The Borough of Kenfig first appears in history in 1140's when the Earl of Gloucester built a church for the planted English settlement and port.

This building, which began as a meeting chamber raised on pillars, may incorporate fabric erected with monies bequeathed by Evan Griffith in 1605, when he left six shillings (thirty pence) 'promised towards building a courthouse in Kenfig'. The building contains a first floor court room where Courts Leet met twice annually, and Courts of Pleas, Inquests and the Hall Days and the Gwyliau Mabsant were convened, and where the burgesses assembled under their government of an elected portreeve and 12 aldermen. The building also did duty as a schoolroom for the borough from the 1670's and a Sunday school was held there from 1864. It is also known as the Guildhall and is still used for a variety of functions and holds a pictorial record of events associated with the historic borough of Kenfig. The present structure is probably that said to have been rebuilt in 1808, and was modified and adapted in the later C19 and C20.

The ground floor plan has been modified by removal of internal walls. End fireplaces. The Town Hall or Court Room on the upper floor, approached by an external flight of steps, is entered at the NE corner. It has 5 bays formed with open timber trusses ceiled at collar level, all probably C18 but restored. Some C17 wall panelling and wooden benches, partly original but mostly restored, and a raised dais at the W end.

Graded II largely on its special historical interest as the focus of the former decayed borough of Cynffig/Kenfig.