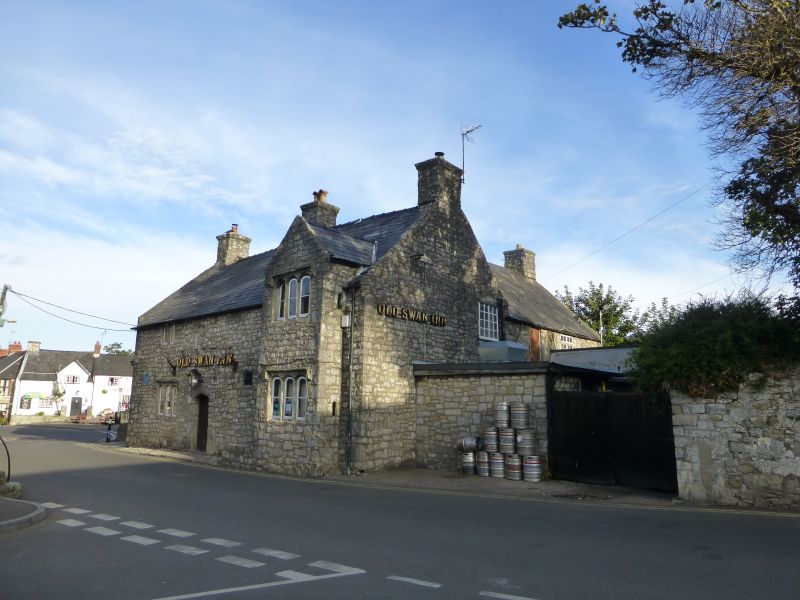 Location: In the centre of Llantwit Major just to the north of The Town Hall.

C16 to early C17. This house is a high status one having three rooms on two floors all of good size and well detailed and finished. It is unusual in retaining a high proportion of its fine dressed-sandstone detailing with high quality features both outside and internally. The mural stair leading to paired dooways at first floor level is a feature also found in Cherry Tree Cottage, Boverton (qv). All this is very completely illustrated in RCAHMW.

Two storey building with roughly squared limestone rubble walls and Welsh slate roof; end and centre stone stacks with weathered tops, and with coping to the gable ends. The building was once all rendered but only a part of the back wall now is. L-shaped building with a modern lean-to addition in the angle of the L.
Front elevation, from west, with 3-light stone mullioned ground floor window with arched heads to lights, spandrels and dripstone; 2-light mullioned first floor window. Secondly doorway with arched head of stone voussoirs; blocked single light oblong window above, thirdly a projecting bay window with three shallow stone steps forming mounting block built up against its west return. Front wall of projecting bay with 3-light mullioned window with dripstone on both ground and first floors, the first floor window with gable over; round headed single light chamfered window in each return to both windows. Cobbled setts before front wall of inn. Modern flat roofed projection at east end; stone boundary walls.
Lower single storey and attic wing against west end, this also has a gabled roof but the ridge is much lower than the main range.
West elevation of north rear wing has a chamfered stone doorway to north and lean-to with modern fenestration to right hand.

Only the ground floor was seen at resurvey. Original internal arrangement has been altered. East room with three stopped and chamfered beams with two layers of mortise holes and the east beam on stone corbel; scratched joists. North wall of this room with two arched chamfered doorways. Fireplace with stone stopped and chamfered jambs. The left hand doorway leads to a stone mural stair with paired doorways at the head. A-frame roof with two tiers of purlins. The interior is very fully illustrated and described in RCAHMW.

Included and highly graded as a very complete survival of a C16 Welsh townhouse.