A Grade I Listed Building in Michaelston-le-Pit and Leckwith (Llanfihangel-y-Pwll a Lecwydd), Vale of Glamorgan 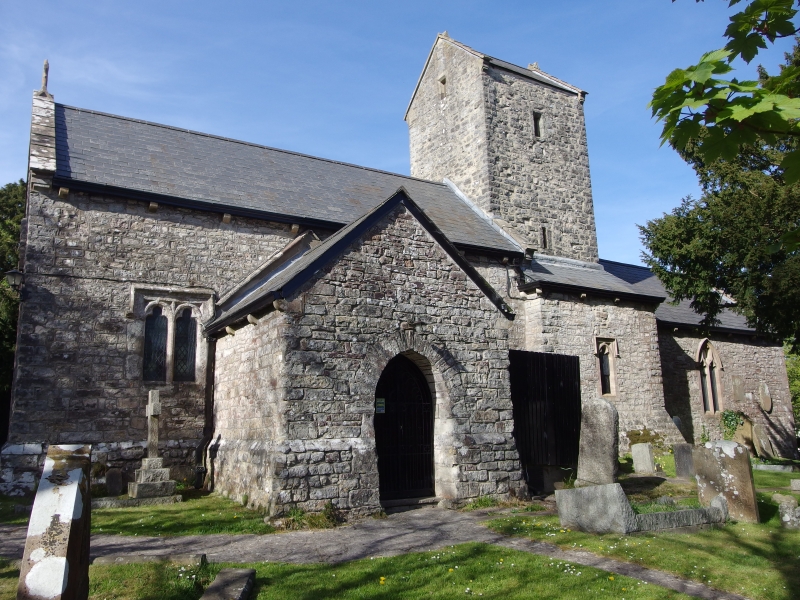 Location: In the centre of the village, on a steep rise, the churchyard sloping to S.

Interior nave and chancel are mostly rendered, the crossing mostly unrendered. The arches of the crossing are plain and pointed. Narrow nave has on S side a panelled 3-decker comprising pulpit, reading desk and stalls, stretching along the S wall; opposite is the panelled pew traditionally occupied by the Cwrt-yr-Ala family. Font is medieval, octagonal with round stem and angle spurs, reputedly lost at the time of the Battle of St Fagans and later discovered in a field. Nave floor of flagstones. W window is by Ninian Comper dates 1955. Pointed-arched tower doorway is within the NE crossing; this gives onto a spiral stone staircase leading to a chamber which had an opening overlooking the chancel, now masked by the C19 ceiling. N transept has an aumbry and S a squint, suggesting former altars here, niche in SW tower wall. Remarkably the pews face W, focusing on the pulpit. Chancel floor is of large clay tiles. C19 Commandment Tablets at E end, painted carved oak reredos of 1927. C17 dark oak chairs depicting scenes of the Civil War representing links with Parliamentarians following the battle of St Fagans. Some stained glass and C19 monuments commemorating the Rous family of Cwrt-yr-Ala. Earliest wall tablet 1729, other C18 examples. Nave roof is C19 open and boarded, chancel has ceiling. One bell of 1698.