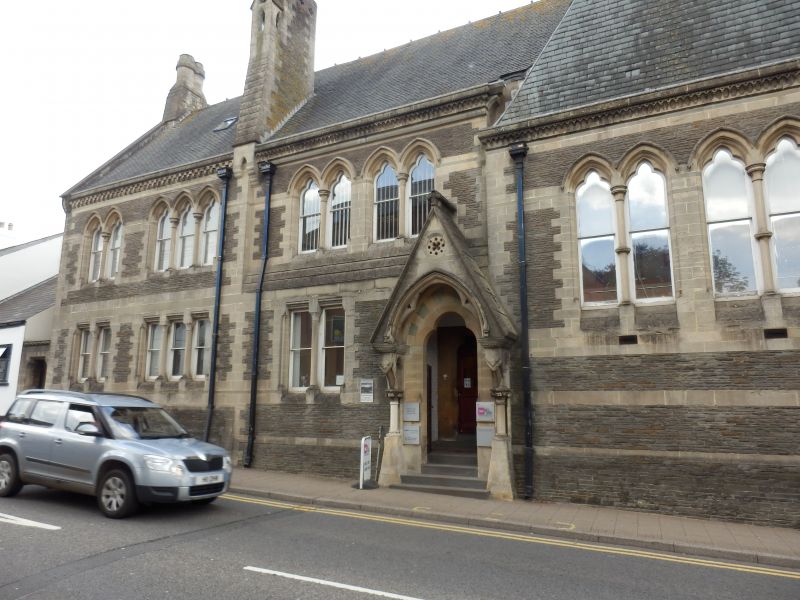 Location: On the east side of Cardiff Road and part of an important group of buildings at the south entrance to Llandaff village.

Built in 1860-3 as the National Probate Registry for Wales; by John Pritchard, architect, builder Thomas Williams of Canton. Still largely unaltered externally. A commercial type building of such elaborate design outside a city centre is unusual for this date and reflects on the importance of its function. Probate was an ecclesiastical function until 1857. The building was converted for modern office use c1990.

This building is constructed with thin courses of squared grey roughly dressed Pennant sandstone with bands of Bridgend stone and with Bath limestone ashlar dressings, Welsh slate roof. Gothic Revival building of two storeys and with four bays, the southernmost bay comprising a slightly projecting cross wing with hipped roof of very steep pitch and with a slightly lower eaves level; this wing is single storey with a higher floor level and contains the public office. Upper window lights are trefoil headed; lower window lights flat headed; columned shafts between lights. From north to south, first bay with 2-light windows; second bay with 3-light windows with chimney stack on verge; three flue stack which has been truncated. Third bay with two 2-light windows on first floor and with a window and a trefoil headed porch with trefoil headed canopy with gable over on ground floor. Fourth bay with two tall 2-light trefoil headed windows only; similar arrangement of windows in right return, one to either side of external chimney; lower rear wing behind this. The chimney reduces to a cylindrical shaft, but has been truncated. The main roof is steeply pitched, but not as steeply as the wing, truncated two flue stack on left gable. Left return is blind apart from a gable oculus. Rear elevation not seen.

Interior of main office seen but this has been given a false ceiling; although a surviving possible hammer-beam roof is suggested above. The building has been converted to modern office use and is clearly very changed internally.

Included at II* as a finely designed and little altered office building by John Prichard, the pre-eminent Victorian architect of South Wales. This building is possibly his finest secular design and the best interior features may survive the conversion to offices.