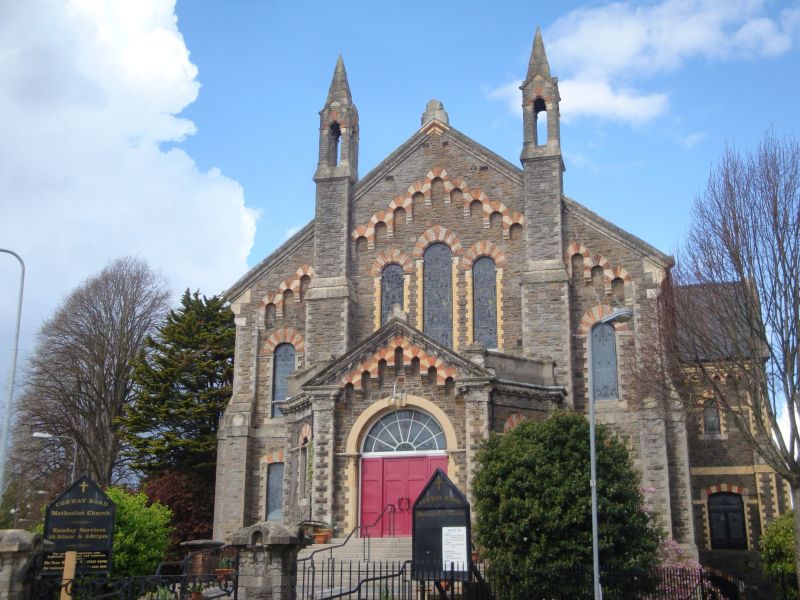 Location: A prominent building in the centre of the Community about 500m north of Canton Cross.

Built in 1869-71 and designed by Habershon and Pite. The church was built in two phases with the transepts and apse added very soon after the first build as congregations grew. This addition can be recognised in the different colours of the window dressings. The church was badly damaged by fire on July 8th 1915 (plaque) and was reroofed soon afterwards. Externally the church has been unaltered since then. It is now the largest Methodist chapel still in use in Cardiff.

Built of rock faced sandstone with pale ashlar, grey, yellow and red brick dressings to openings. Three storeys, nave with gallery over a Sunday school, with projecting porch and an addition in the form of three-storey transeptal wings to form a crucifiorm plan with a polygonal apse as the head of the cross. Lombardic Romanesque style. The main entrance is in the south-east end. This elevation is gabled and has a stepped triple arched window in centre flanked by buttresses with pinnacles and then to either side flanked again by a further bay with round-headed windows at upper level and slightly cambered headed windows below. A long external staircase leads up to a splayed 5-sided vestibule with corbel table; centre facet wider and gabled with semi-circular headed doorway. East and west three-storey returns each of four bays punctuated by buttresses; round-headed windows at top level, slightly cambered headed windows at intermediate level and flat headed windows at ground level. Corbel table goes right round the church; the roofs are otherwise plain apart from an anthemion motif on the entrance gable. The transepts have one window returns and a gabled end with a stepped triple window over three arched windows; the apse is blind.
The grey bricks which form the quoins and dressings in the first build are apparently ones made from ash and would thus be replacements, probably after the fire, some are clearly cemented over.

Large horseshoe shaped auditorium which has been changed from its original appearance in three main ways. The organ chamber was added after the original build, the roof was completely rebuilt to a new profile after the 1915 fire, and the under-gallery was partitioned off to make a meeting room in 1968. The fire, however seems to have been mainly in the roof with damage below caused by water and falling debris (photograph in the vestry) and the balcony and furnishings are mostly still C19. The massive balcony is supported on cast iron columns and on unusual, large iron brackets cast in two parts, the columns are marked 'W A Baker and Co Ltd Newport ironfounders'. The balcony is fronted in decorative cast iron in serpentine form, as is the organ balcony; railing with mahogany rail to 'set fawr' enclosure, simple pine furnishings. Romanesque style pulpit. The roof is an elliptical ribbed plaster vault which does not reproduce the original form. The fine organ dates from 1920, as does the elliptical arch which houses it. The rear ranges were not damaged in the fire; neither were the schoolrooms beneath, these have more plain iron columns.

Included as a good Victorian Methodist church, which, despite alteration, retains a strong architectural character and presence.