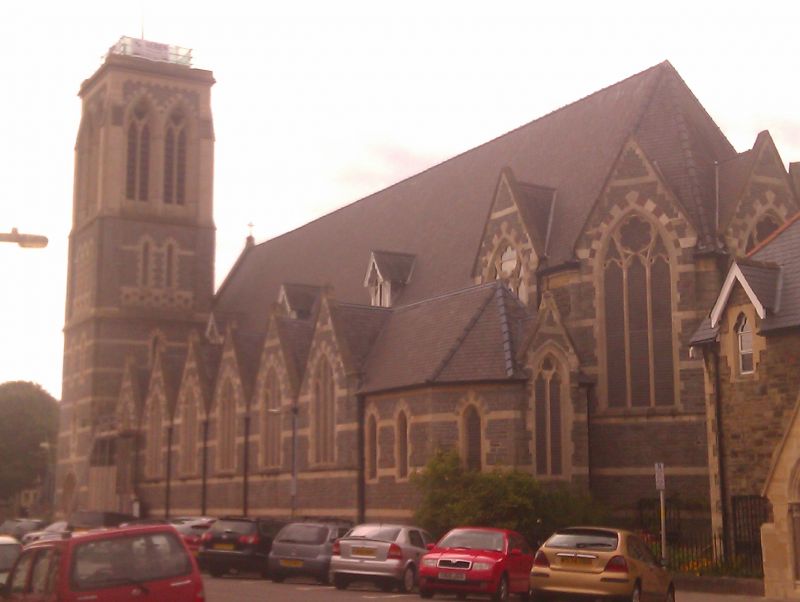 Location: Prominently sited and facing directly on to the street.

Built 1860-1 by C.F. Hansom, architect of Bristol. The contractor was John Webb & Sons of Birmingham. The sacristy and cloister were added in 1872 by W.P. James, architect of Cardiff, integral with the Presbytery immediately to the E. The SW tower was completed in 1884 by J.J. Hurley to Hansom's original design. The reredos and other alterations were undertaken in the 1960s by Denis Clarke Hall, architect of Cardiff, when the rood screen was dismantled.

Church in French C13 Gothic style comprising nave and polygonal chancel, aisles with chapels, and SW tower. Of coursed rock-faced Pennant sandstone with lighter freestone dressings and bands and slate roof. Openings have polychrome arches of pale limestone and mainly Pennant sandstone but with red sandstone to the chancel and W window. The distinctive S aisle is 6 gabled bays with 3-light windows. A 3-bay polygonal chapel at the E end of the S aisle has a lower eaves line, single cusped windows and a 2-light E window under a gable. The nave also has 3 clerestorey dormers comprising 3-light windows with cusped heads and cusped barge boards. The chancel has 3-light windows beneath gables, including high-set windows above the aisle chapels.

The 4-stage SW tower projects in front of the S and W elevations. The lower stage is the porch. On the S side is a doorway with 3 orders of nook shafts, moulded capitals, and moulded arch with hood mould and foliage stops. Double doors installed in the 1960s have narrow fluting. Above the doorway is a sculpture of St Peter in a canopied niche with crocketed gable. In the W face is a 2-light window with plain hood mould in the lower stage, while both W and E faces have single windows to the second stage, with stair lights to the L side in the W face. In the 2nd stage the S face has a pair of cusped lancets. The angles are rebated in the 2nd stage beneath moulded string course above which, in the 3rd stage, the rebates turn to angle buttresses. The 3rd stage has, in the S face, triple cusped lancets, in the W and E 2 lancets, below which are 5 blind star-shaped panels. The upper stage is ashlar and has 2 nook-shafted 2-light belfry windows. Above the windows the wall is rock-faced stone, and a moulded cornice and coping. (A parapet may have been intended but was not added.)

The W front has a doorway with 2 orders of nook shafts and a hood mould with head stops. Double doors are of the 1960s. The doorway is flanked by single cusped lights. Above a string course are taller cusped lights incorporating pointed trefoils in the tracery, to the sides, and a tablet to the centre that incorporates cross, swords and helmet. The main W window is a rose window with polychrome surround and geometrical tracery. At the NW angle is a buttress with gabled cap. On the N side of the W front, balancing the tower to the S side, is the gabled baptistery at the W end of the N aisle, which has a 3-light W window.

The N side has similar details to nave and chancel, and an added cloister. At the W end the cloister has a doorway in an ashlar surround, with cusped arch and open trefoils in the spandrels. The first gable bay from the W end is blind with lean-to cloister, the second is higher and incorporates a NW chapel with lower gabled projection. Further E the cloister has a moulded parapet, 3 windows with shouldered lintels, and an added lean-to. The sacristy is at the E end and comprises a 1½ storey wing that links to the W side of the Presbytery. The N side has 4 full dormers and a modern projection. The S side is 3-window with 2-light transomed windows and cusped lights to full dormers.

In the porch is a blocked arch to the S aisle, and an arch leading to the nave. Both have one order of nook shafts, moulded capitals and hood moulds with ballflower stops. The baptistery on the N side of the nave is reached through a 2-bay arcade with round central pier and stiff-leaf capital. Between porch and baptistery is an organ gallery enclosing a vestibule at the W end.

The 6-bay nave arcade has octagonal piers and chamfered arches in late C13 style. The roof has arched and scissor braces on corbelled walls posts and has a boarded underside. There is no chancel arch, the division between nave and chancel being painted quatrefoils above and between the scissor braces. The chancel has an additional arcade bay continuous with the nave arcade, within which is a subsidiary 2-bay arcade to the aisle chapels, with round central pier and foliage capitals. The chancel has an arched-brace roof with painted underside. A reredos added in the 1960s of fluted polished stone is placed in front of the lower part of an original reredos, the upper part of which comprises sculpted angles on corbels and beneath gabled canopies, in between which are panels with foiled circles, and on a string course and with moulded cornice. The windows have painted reveals.

The Lady Chapel in the N aisle and Sacred Heart Chapel in the S aisle both have pointed wooden arches on round shafts from the aisles. They have painted ceilings and reveals, the Lady Chapel ceiling repaired and repainted after bomb damage in the 1939-45 war. The Lady Chapel has a cusped piscina and 5-bay reredos by Padraig Pearce. This has cusped arches and pinnacles and marble shafts. The central bay has a canopied niche with a sculpted figure of Mary, while the outer panels have scenes in mosaic from the life of Mary. The NW chapel has an arched entrance with round freestanding piers and stiff leaf capitals.

The Perpendicular style octagonal font has a panelled stem and quatrefoils around the bowl. It has been moved from the baptistery to the nave. In the Sacred Heart Chapel the stone altar has a bas-relief of the Last Supper. Stations of the Cross are dated 1926. They are composed of wall panels of Venetian mosaic set in frames of grotte rouge marble designed by T.A. Jones of Cardiff.

The church retains a complete set of late C19 and early C20 stained glass. The chancel windows are of 1883 by Meyer of Munich, one of which was donated by the 3rd Marquess of Bute. They show New Testament scenes above scenes of the early evangelists in Wales, England and Ireland, namely SS Fagan, Patrick, Gregory and Augustine. In the Sacred Heart Chapel the E window, also by Meyer, shows St Catherine at the foot of the Cross. The other chapel windows are by the firm of Hardman of Birmingham, and depict SS John the Evangelist, Patrick, Bernadine and Helen. The Lady Chapel N windows, also by Hardman, have figures of SS Joachim and Anne.

The nave S aisle has memorial windows by Hardman dated between 1893 and 1910. They narrate scenes from the Nativity to the Passion of Christ. In the N aisle are 5 memorial windows by Sanders in the style of the Birmingham school, of the period 1905-14. They narrate biblical scenes including the sacred heart pleading, the marriage at Cana, the Annunciation and Expulsion from Paradise. A further window in the Baptistery shows the Baptism of Christ. The porch has a stained glass window inserted in 1929 commemorating John Lloyd (1630-79), a seminary priest, and Phillip Evans (1645-79), a Jesuit Priest, both of whom were executed in Cardiff and were canonised in 1970 as 2 of the 40 Martyrs of England and Wales.

Listed grade II* as an especially fine Gothic Revival church, particularly distinguished by the well-proportioned tower and the gabled aisle and chancel windows, with good internal detail including a complete scheme of high-quality late C19 and early C20 stained glass.