A Grade I Listed Building in Roath, Cardiff 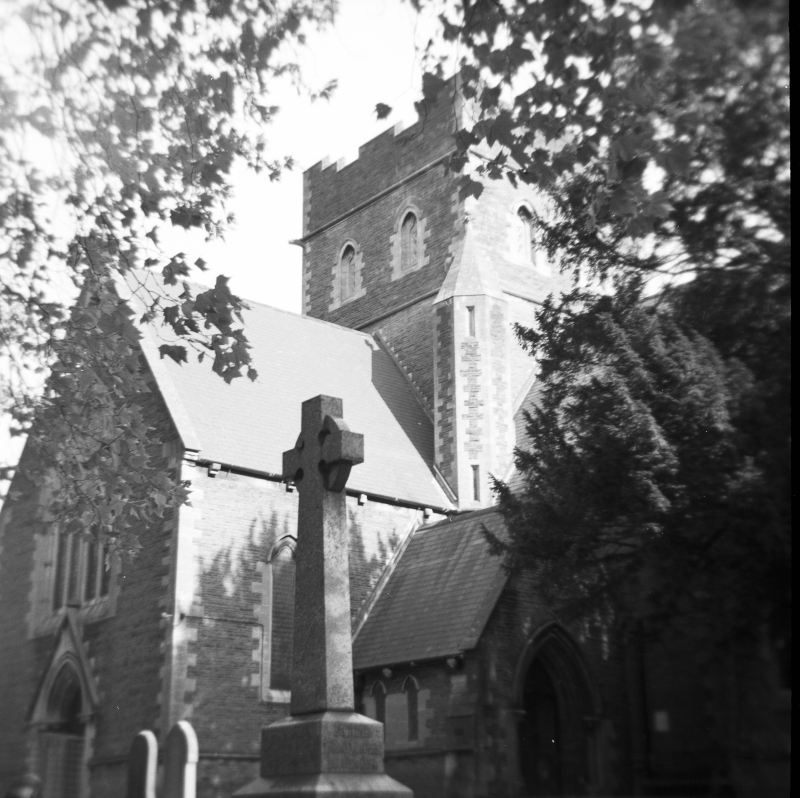 Location: In a walled churchyard at the S end of Waterloo Road N of it junction with Newport Road.

The present church is by John Prichard, architect of Llandaf, and was completed in 1870, replacing an earlier church on the site. The living of St Margaret had been purchased by John Stuart, 1st Marquess of Bute, in 1793. In 1800, the year of his first wife's death, a mausoleum was built on the N side of the church. This was retained when the earlier church was demolished in 1867. The new church was begun by Alexander Roos, architect to the Bute Estate, but in 1868 Roos was dismissed by the 3rd Marquess and Prichard was engaged in his place. Prichard built his church on foundations already laid to the original design by Roos, except that the intended S tower became the porch, although his intended crossing tower with spire was not built. The contractor was Thomas Williams of Canton, with E. Clarke & Son of Llandaf engaged to undertake the sculpture, and simple patterned glass was supplied by Saunders & Co of Birmingham.
In 1881 work began on a new mausoleum to replace the original structure, also designed by Prichard, which was completed in 1886. The present tower, designed by John Coates Carter, was built in 1926. The contractor was Turner & Sons of Cardiff. Other minor alterations include the replacement of the original glass over the period 1890-1920. In 1925 the original reredos was replaced, and was later re-erected at the Church of St Anne, in Roath.

Geometrical style cruciform church with crossing tower, NE Bute mausoleum, SE vestry and S porch. The nave is short and the chancel higher than the nave. Of coursed rock-faced stone, lighter freestone dressings and slate roof behind coped gables on moulded kneelers, with corbelled rainwater goods. A string course is over a slightly battered plinth. Windows have hood moulds, mostly with head stops.
The gabled porch, attached to and set back from the S transept, has a doorway with a single order of Radyr stone nook shafts with foliage capitals, and an inner shaft continuous with the arch. The doorway has a hood mould with foliage stops. It has double half-lit doors with diagonal leaded panes and similar glazing to the overlight. In the W side wall of the porch are 2 hooded cusped lights, while the nave has a cusped window to its L. The S transept has 2 2-light windows and a buttress between. Above is a central sexfoil window with hood mould continuous with a string course. In the E wall of the transept is a single cusped window. On the S side of the chancel is the sacristy and vestry, which has SE angle buttresses, and a lean-to roof behind a coped parapet with cusped trail to the cornice. A central boarded door with strap hinges has a shouldered lintel. A buttress is to the R of the doorway. At the ends are single cusped windows, with a similar window in the E wall. A tall stone stack with 2 attached round shafts rises from the eaves of the chancel, which also has a corbel table with grotesque heads.
The chancel has a 5-light E window. The NE mausoleum has gabled buttresses with trefoils, above which are sculpted flying angels, except to the abutment with the chancel. To the NE angle is a broad pinnacle composed of clustered shafts. The mausoleum has a 3-light E window, and a stepped sill band. Below the window is a memorial to Harriet Watson (d 1832) and descendants composed of a gabled canopy with quatrefoil and flanking shields in relief over a blind segmental panel with a memorial inscription. A smaller 2-light window is in the gable, with moulded sill band. The buttressed N wall is 2-bay, with 3-light windows, a band below sill level, and a corbel table of grotesque heads supporting a parapet of blind quatrefoils with relief foliage.
The N transept projects slightly in front of the mausoleum. It has 2 2-light windows and sexfoil window above, similar to the S transept. In its W wall is a C19 3-light window, re-used and originally the W window of the earlier church. It has simple Perpendicular tracery with subsidiary reticulated tracery in the main tracery lights. The N wall of the nave has 2 cusped lights. The 4-light W window has ringed shafts, and above is a quatrefoil in the gable. The W doorway has a crocketed gabled hood breaking the sill line of the W window. The doorway has 2 orders of nook shafts, of which the outer is Radyr stone and the inner is more slender and filleted. Both have foliage capitals. The 2-centred arch has a hood mould with bestial stops. Double boarded doors have strap hinges incorporating an early C14 style scrollwork pattern over the upper portion of the door.
The simple crossing tower has a polygonal SW turret with pyramidal stone roof below the belfry stage. The belfry stage has string courses above and below. Each face has 2 pointed openings with hood moulds and disc stops. They have Somerset-style traceried sound holes composed of quatrefoils set in a lozenge pattern. The embattled parapet is higher at the corners.

Listed grade I for its rich and well-detailed interior, characteristic of one of the foremost C19 ecclesiastical architects working in Wales, and for the outstanding architectural and social significance of the Bute family mausoleum, the only such mausoleum in Wales.