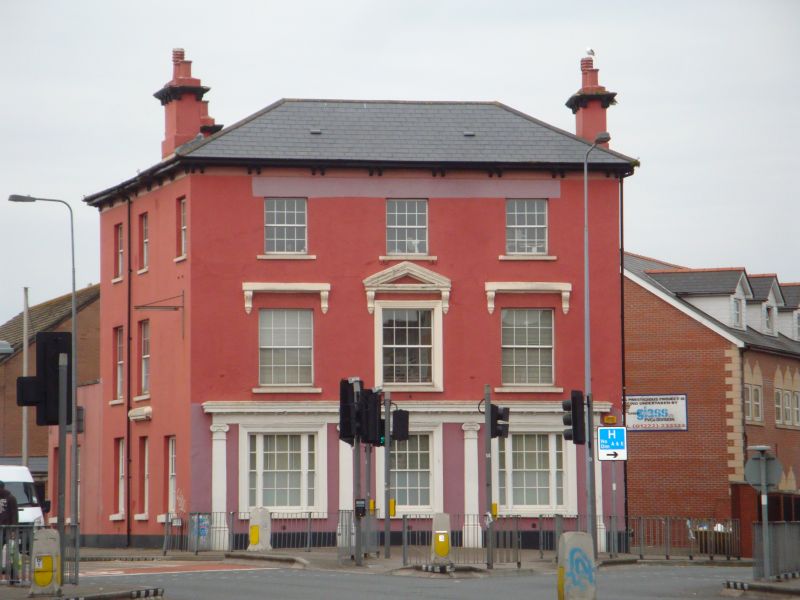 Location: A prominent building at the junction with Wellington Street.

A mid C19 public house, dating probably from 1840-50, built at a strategic city crossroads. It was still a public house when listed in 1976 but has since been converted to offices with some alterations to the main elevations.

Three storey corner building on junction with Wellington Street. Hipped Welsh slate roof with paired bracket eaves and wall stacks, cornice and stuccoed walls.
Eastern or front elevation of three bays. Sash windows three panes wide in reveals in square headed openings on second floor. On first floor, sash windows four panes wide, the end windows with cornices on consoles and the centre window with moulded architrave and pediment on consoles. Ground floor articulated by Ionic pilasters with bands of fluting and continuous moulded bracketed cornice. A restored 3-light sash window with 2 over 2 panes flanking 6 over 6 in moulded architrave to each side of new 8 over 8 pane sash with moulded architrave in what was once the central doorway. Side elevations in similar style but with incomplete fenestration pattern.
Wellington Road elevation: Plain with three sash windows on the ground floor, two on the first and three on the second, all 8 over 8 pane sashes. Blank wall of lower wing to left.
Cowbridge Road East elevation: This has the ground floor as the main elevation except now with a central doorway and with a blind panel in place of the left hand window. Blind panel also to left hand window on first floor; three windows on upper floor, all 8 over 8 sashes. Later wing to right, two storeys only and built of banded pennant sandstone; projecting two storey central bay.

The public house interior was lost when the building was converted to office use in c1980.

Included for its special architectural character in a prominent townscape location.