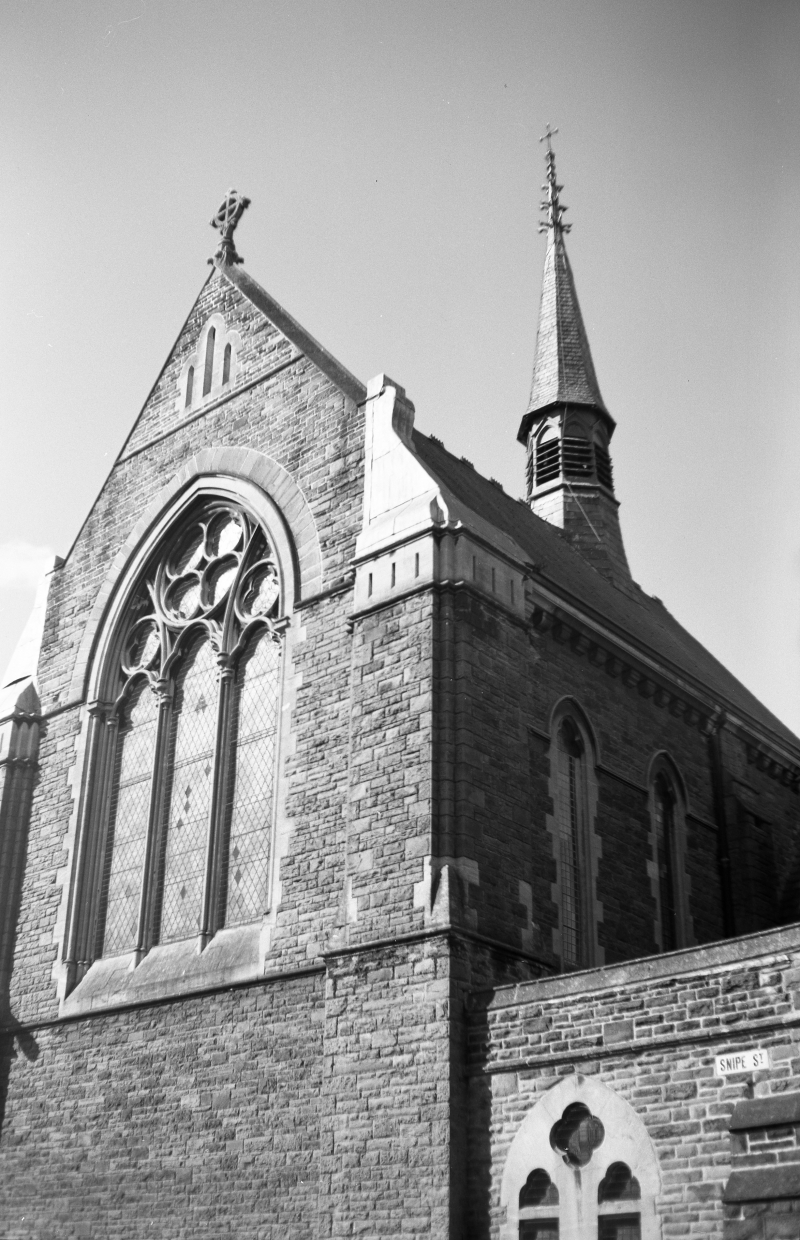 Location: At the N end of Snipe Street, with the entrance on Crofts Street on the S side of St Anne's school.

Begun 1886-7 by J Arthur Reeve, architect. The contractor was Shepton & Son of Cardiff. The N aisle and vestries were not added until 1891, but the church was not completed to its original design, as an intended clerestorey was not added to the nave, while the S aisle was added in 1936-7 by Caroe & Passmore. The late C19 reredos in the N aisle, designed by John Prichard, diocesan architect, was brought from St Margaret, Roath. In 1991 alteration was made to the interior when the half and single bay at the W end were divided from the remainder by an inserted partition.

A Gothic church in early French manner, perhaps influenced by the work of William Burges, to whom Reeve was an assistant. Comprising aisled nave but dominated by a lofty chancel, which is higher than the nave, and its octagonal fleche, with N vestry and sacristy. The walls are of snecked, rock-faced Pennant sandstone with lighter Corsham Down dressings including coped gables with crucifix finials. The roof is slate with ridge tiles to the chancel. The chancel has a high 3-light geometrical E window with voussoirs, flanked by tall rendered kneelers that are swept down over the freestone caps of clasping buttresses. (The kneelers are in the position of corner turrets in the original design.) Above the window are 3 stepped vents with a thin string course below. The fleche has crockets to the top and louvred belfry openings. The 2-bay S wall has a central buttress, R of which are 2 lancets which have hood moulds continuous with an impost band, while the L-hand bay has a shallow lean-to projection. The moulded cornice incorporates a corbel table. The N side of the chancel is similar, with 2 lancets W of a central buttress and above the sacristy. The sacristy has 2-light E window, 2 cusped N windows and central doorway under a shouldered lintel with boarded door and strap hinges. The higher gabled vestry and organ loft to the W has gabled buttresses, 3 windows and a lintelled doorway, with 2 lancets above and 2 quatrefoils in roundels to the gable. A reduced stack is on the E side.

The W end of the chancel, above the nave, is slate hung, but abutments show that the nave, with clerestorey, was originally intended to be of the same height. The E wall of the S aisle and part of the chancel S wall are pebble-dashed. The aisles 4 have simple cusped lights in the N aisle and similar but paired lights in the S aisle. A simple gabled porch is at the E end of the N aisle with the doorway under a moulded arch. The W end of the nave is rendered and has 2 lancets.

The 2-bay chancel is richly conceived and is the principal interest of the interior. Between the bays is a broad respond with ringed shafts and a pair of moulded arched braces. The chancel has an open timber roof with closely-spaced rafters (although not the original design). The windows, all set high and over a sill band, have rere arches with ringed shafts. Blind arches with ringed shafts flank the E window and all are superimposed by a full-height arch with similar ringed shafts. In the W bay of the chancel are tall arches with 2 orders of ringed shafts and 2-centred arches, blind on the S side (intended for a S chancel chapel) and opening to the organ loft on the N side. The arches both have roundels in the spandrels with demi-angels in low relief carved in 1898 by H. Gunthorp to designs of T. Nicholls.

The chancel arch has responds with nook shafts, but the arch is obscured by the lower nave roof. The 4½ bay nave arcades are C13 style with piers of 4 clustered shafts with uncut capitals, except for a single stiff-leaf capital in the N aisle. Arches have 2 orders of chamfer and continuous hood mould. Transverse lower arches, with punched roundels in the spandrels, are also built across the aisles.

The nave has a utilitarian king-post roof with diagonal struts. A pair of corbels at the NW end suggest a more ambitious original design that was not carried out.

The polychrome marble reredos by Prichard is at the W end of the N aisle. Of 3 bays, it has cusped arches on shafts with foliage capitals and beneath crocketed gables. The wider central panel depicts the Agnus Dei, while the lower portion has an inscription band and quatrefoils with symbols in marble including Alpha and Omega, a fish and Chi-Rho monogram. Other furnishings include an octagonal font with round stem, detached shafts forming an arcade of cusped arches around the bowl, which pairs of blind cusped arches in each facet. The octagonal wooden pulpit has a moulded stone base, and faces including relief panels narrating scenes in the life of Mary, and a 1914-18 war memorial.

Listed primarily for the special interest of its interior, including the chancel fittings, a fine marble reredos, and nave arcades.