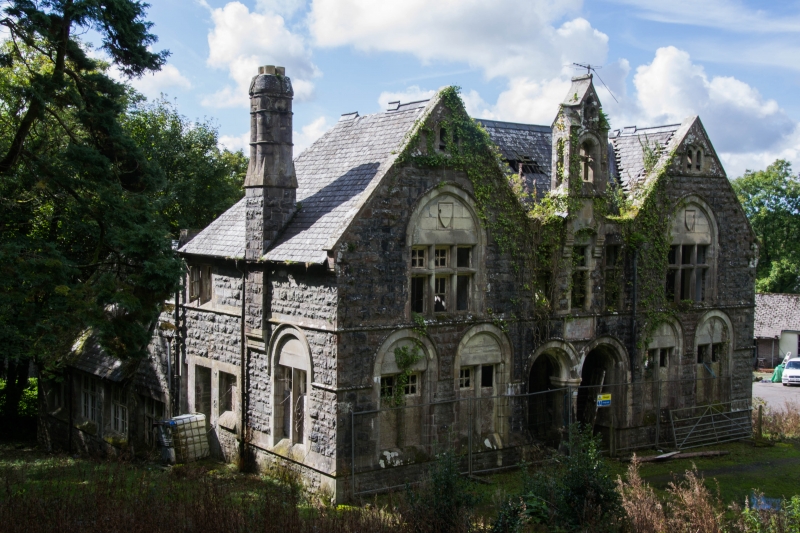 Location: Situated on sloping site on the N side of the valley, approximately 0.5km E of the village of Trecwn.

School 1875-77 by Ernest C. Lee of London, built at the expense of H.A. Ince of London in memory of his sister Elizabeth Maria Barham of Trecwn, for 100 children.

School, rock-faced squared Preseli stone with grey-brown sandstone ashlar dressings, and steep slate roofs. Free style combining mullioned windows, round arches and some gothic detail, akin to the work of Philip Webb. Two-storey, 3-bay symmetrical N front with two gables flanking centre bellcote, and one to one-and-a-half storey rear ranges set down-slope of the front range. Front has coped shouldered gables each side: each has pair of arched vents with hoodmoulds in ashlar apex, big 3-light first floor mullion-and-transom ashlar window with broad blind arched head, blank shield, and hoodmould, and 2 ground floor narrower but taller 2-light windows with blank arched heads and hoodmoulds. Windows have timber, not stone, transom. Ashlar plinth at sill level, impost band continued as hoodmoulds, first floor sill course, and course under gable apex and at impost level of vents. Narrow centre has parapet with ornate bellcote breaking through on corbels. Single bell opening with hoodmould to front, narrow openings each side under cross-gables while front has higher small gable with tiny 2-light and roundel. First floor 3 narrow windows each with ashlar transom, the centre one with head between corbels of bellcote. Sill course. Ground floor has marble plaque to centre over pair of massively detail round arches with hoodmoulds and deep centre pier with back-to-back columns, moulded bases and heavy capitals. Within is recessed porch with panelled door flanked by narrow window with top light. Right end wall has large 3-light window with blank arched head, similar to those on ground floor front. Plinth, impost band and first floor sill band continued around. Roof is hipped at SW angle and has truncated chimney at corner.
Rear has fishscale-slates hung in centre with narrow band of windows at first floor. Left (E) end wall roof is also hipped to rear SE but with a slight projection making the whole front range slightly L-plan, the roof hip steep and carried down as outshut onto the classroom ranges behind. First floor cross window in W return. E side has side-wall chimney corbelled-out, 2-light window first floor left, and moulded sill course interrupted by chimney. Ground floor right 2-light window with blank arched tympanum and hood, as on front wall, and left door and window. Outshut has end wall 3-light mullion and transom window set lower, reflecting change in levels.
Because of slope the rear ranges are at lower level, equivalent to basement, an L-plan range of classrooms, one running S from E end of front range, the other returning W, and the narrow court between infilled with cloakrooms. This single-storey infill has 2 gables to W, originally both glazed in small-panes, the right one boarded over, above a pent slate roof sheltering 2 doors with 2 small square lights between. To right the gable-end of the E-W range has timber 3-light mullion-and-transom window with pointed slate-hung tympanum pierced by a square light. Hoodmould, ashlar apex with twin vents. One 3-light hipped dormer on the N roof slope. Ridge ashlar chimney stack with gablets and shaped cap. The N-S classroom range has similar gable to S but with depressed arch over big 3-light window with 2 transoms. Two 3-light windows to E side. Two hipped 2-light dormers on W side, visible over roofs of W entrance lobbies.
Attached by a low wall is a small square toilet block with half-hipped roof, gablets, Caernarfon-arched door to N end with 2 small square windows to right, W side has 2 similar windows to left and one to right of similar door.

Interior not accessible, from entry a staircase leads down to lower levels. SE classroom said to have plaque over stone chimneypiece recording Mrs Barham's wish that the Bible be constantly taught and read in the school.

Included as a well-designed and executed later Victorian school, with advanced architectural detail unusual for the period.