Group of 4 chest tomb in churchyard of St James, Pyle 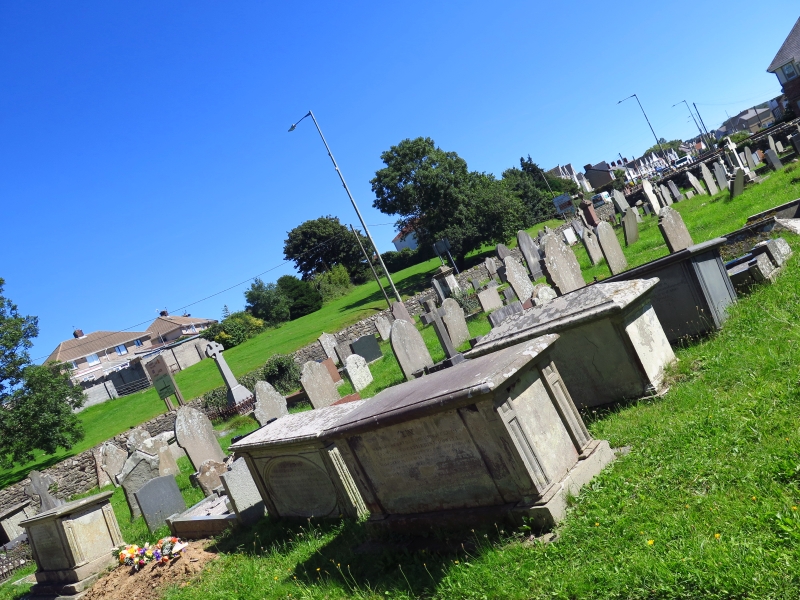 Location: The church of St James stands at the N end of Pyle. The group is set against the entrance path from the road to the S porch, approximately 6m S of the nave. The character of the churchyard is notable

The group is mostly early C19, the finest, (a) constructed presumably after the death of D Richards after 1823.

The group of four tombs consist of one (a) at the E, and 3 (b, c and d) forming a row immediately to the W of the first, described from N to S:

(a) Limestone. The chest is set on a stone base, with moulded plinth and fluted corners, and is capped with a ledger slab. The sides are carved with a boldly moulded oval, with fan corners, and bears on the N, a well cut inscription on the cushioned face to David Richards of Merthyr, d. 1823, and Margaret Morgan of Pyle, d. 1828.

(b) Sandstone. Chest tomb similar to the Rees Williams monument to the E, but raised on 2 steps, to Catherine Powell, d.1843, and Jehosaphat, her son, d.1909 added.

(c) Sandstone. A plain slab sided chest tomb, the end panels moulded top and bottom, and a hipped ledger slab, to Jehosaphat Powell of Lanmi(hangel), d.1819, with other names added.

Included as a fine group of an early C19 chest tombs, with finely cut lettering. Of group value with the Grade I St James' Church.