A Grade I Listed Building in St Brides Major, Vale of Glamorgan 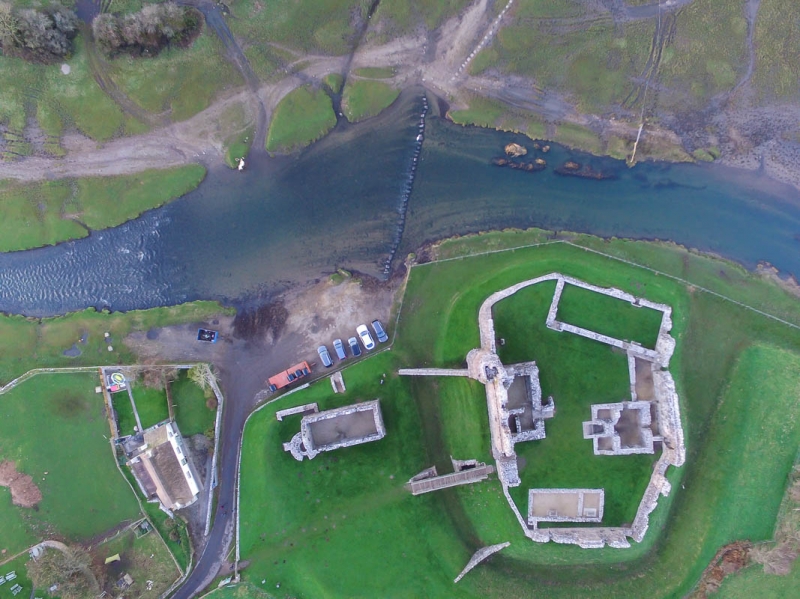 Location: Located on the SE side of the River Ewenny, just before it joins the Ogmore River, in the hamlet of Ogmore to the NW of the B4524. A series of stepping stones cross the river at this point.

Norman motte and bailey castle of earth and timber established by William de Londres. The stone keep was constructed in the early C12 and is one of the earliest of its type. It was originally 2-storey, and later raised to 3 storeys with the addition of a stair turret to the W, replacing former external stairs on the NE side. A cellar inside the ringwork dates to the later C12. The curtain wall, remaining internal structures, gateway and bridge were built in the early C13. The internal ground level was raised at this time, and extra steps added to the cellar. The castle was still held by the descendants and successors of de Londres, until 1298 when Maud de Chaworth married Henry Lancaster. The castle remained in the hands of the Duchy of Lancaster until it was taken over by the crown in 1399. A circular lime-kiln was built c 1300 in the outer bailey on the site of an earlier structure. It was then abandoned and part demolished, to allow for the construction of a court-house which is attributed to Lancaster. It is said to have been rebuilt in 1454-5, possibly as a chapel rather than a court-house (it is labelled 'chapel' on the Ordnance Survey of 1885). The castle was still in use in the 1530s, but had been in decay for many years by 1631.

The castle consists of an oval shaped ringwork surmounted by masonry structures, with earthwork bailey to the SW. A ruined courthouse is located on the N side of the bailey, along with the remains of a lime-kiln. The stone keep of the early C12 straddles the ringwork on its SW side. The later C12 cellar faces it to the NE. The curtain wall of the early C13 replaces the timber palisade of the castle and abuts the keep. It includes a gateway and bridge to the S of the keep. Two further buildings were constructed inside the curtain wall, a hall to the NW and offices to the SE.

Three-storey, rectangular keep of local limestone with Sutton stone dressings. The exterior (SW-facing) wall has a band at 2nd floor level, showing that the top storey was added later. The 1st floor has a window opening in the centre with trefoiled arched head. To its R is a small round headed lancet. Abutting the L side of the keep is an added semi-circular stair turret and garderobe. It has an arrow loop at 1st floor level on the SE-facing side over-looking the bridge. There is a small square headed window at the same height on the SW side. The base of the turret is built into the ditch and has a low arched recess with segmental head, an outlet for the garderobe. The NW, SE and NW walls of the keep survive to a lower level. There is an opening into the NE side which is probably not original.

The interior side of the SW wall is partially plastered and is distinguished by the remains of a fireplace at 1st floor level. The stone chimney-piece has round columns, scalloped capitals and the remains of a curved hood. To its L, the 2 windows have round heads. To its R is the cross-corner doorway to the added stair turret. The 1st floor joists are well preserved. At the W angle is the shoulder of a wide stone arch, said to be for a NW window, later altered to a door leading to the walk-walk on the curtain wall. The added 2nd storey has a fireplace, also with stone jambs and moulded corbels. To its L is the probable remains of a very decayed window. The basement storey has an added opening to the NE. Originally, it is said to have been entered via a trap door from the 1st floor. The basement plan is 2-unit; that to the SE being divided by a NW-SE wall. That to the NW is lined by stone benches to the SW and NE.

The large square cellar is thought to have had a timber superstructure, and is situated on the NE side, within the curtain wall. It is approached by stone steps from the SW, which pass under a round arched vault. The entrance narrows at the bottom of the stairs and has stone jambs. Two added small bays flank the entrance at approximately ground level, that to the SE has an opening with dressed jambs and splayed reveals. The undercroft itself has a partially blocked window with segmental head to the SE and an opening converted to a door to the NW. Similar opening to NE with dressed reveals. Beyond this, the floor level is higher. This narrow NE bay has a doorway out to the NW which leads into another room, and there are recesses, probably for joists, in the interior of the curtain wall.

The gatehouse is located to the SE of the keep and is part of the curtain wall. It survives as a small rectangular structure, the entrance having a segmental arched head. The stone abutments of the draw bridge survive, and now support a timber superstructure. The ditch has occasional cross walls, each with an opening for drainage. There is no ditch to the NW of the castle, due to the proximity of the river. The oval curtain wall survives to varying heights around the castle, but is highest towards the E. Constructed of random blocks of stone, the wall is wide and the interior sides taper slightly towards the bottom. It contains small recesses to the interior, perhaps putlog or joist holes. As well as the gatehouse, there is an entrance to the NE. Only the lower part survives, with chamfered stone reveals and threshold, and garderobe turret to its E. There is also an entrance on the NW side leading out of the hall.

The hall is built against the NW interior side of the curtain wall. It survives as a long rectangular range up to 1m high with opposing doorways in the SE and NW walls, towards the NE end.

The office block to the SE survives as a low rectangular range, with a small room to NE end. A short wall links the SW end of the SE wall with the curtain wall.

The court-house in the outer bailey is a roofless single-storey rectangular building orientated SW-NE, standing almost to full height. The SE side faces into the bailey and has a doorway L of centre flanked by windows, all with decayed segmental heads. The NW side has a narrow doorway towards the NE end with dressed reveals and a pointed arched head. There is a narrow window to its L with dressed reveals, chamfered flat stone lintel and sill. The NE and SW gables each have dressed windows; that to the N has wide splayed reveals, whilst that to the S is narrower and higher. Beneath the latter, on the interior wall, are some joist holes, perhaps suggesting a gallery. Immediately SW of the building at ground level is the remains of a circular lime-kiln with 2 opposed flues. To the NW of the court-house are some stone steps which lead down from the bailey towards the river.

Listed grade I as an outstanding example of this building type. The stone keep is one of the earliest of its kind, and the castle is unusual in retaining its bailey and ringwork.