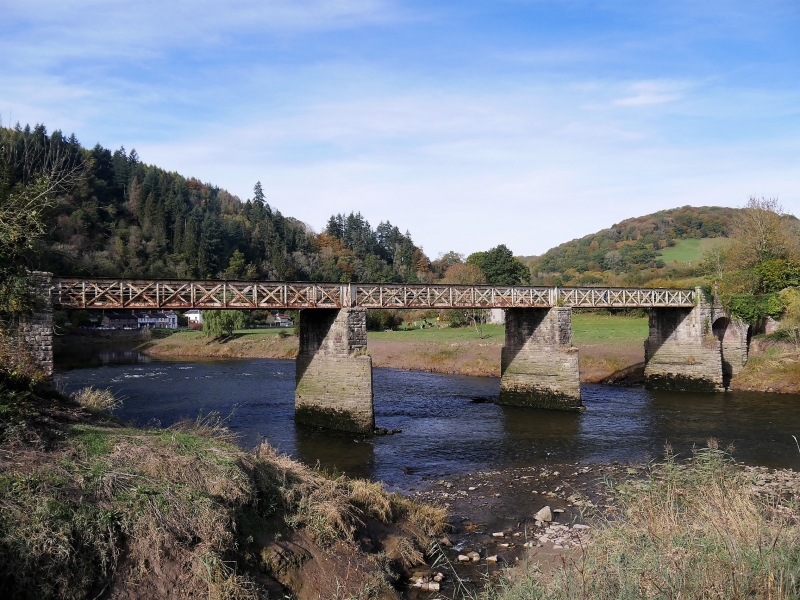 The bridge was constructed in 1872-5 and was actually ready for use before the railway which served it. It was designed by S H Yockney and Son of Westminster for the Wireworks branch of the Monmouth and Wye Valley Railway. The contractors were Reed Bros of London and the ironwork was supplied and erected by the Isca Foundry of Newport. The bridge was designed to carry no more than a small locomotive and three trucks. The Wireworks closed in 1901 but the bridge continued to carry a horse tramway until 1935 when it was finally closed and has been a footpath ever since.

Constructed of sandstone ashlar with wrought iron. Three span single track railway bridge with two small side spans at the English end and a solid abutment at the Welsh end. Two semi-circular arches at the English end, three large sandstone piers, three spans of rivetted cross-braced wrought ironwork. The track ran through the girders which are separate over each span. The track bed has been boarded to act as a footpath. The bridge spans the border between Wales and England and between Monmouthshire and the Forest of Dean in Gloucestershire.

Included as an unaltered wrought iron railway bridge of the 1860's, which has survived unchanged through very light use.