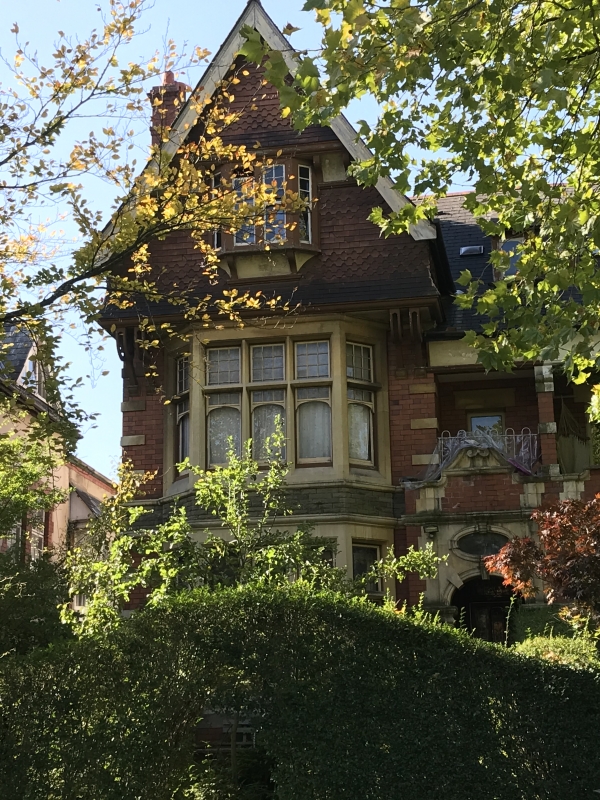 Location: Opposite Roath Park Pleasure Gardens and set back from the street behind a low-walled garden with approach steps.

Residential development in the northern area of Roath occurred in the period 1890-1914. The Marquess of Bute had donated land around Roath Brook for a public park in 1887, beginning an overall strategy for development of a high-quality residential district, to which the setting of Roath Park was instrumental. Houses were let on 99 year leases and proximity to the park made it a desirable location, allowing higher ground rents to be charged. The Bute Estate exercised careful control by employing its estate architect, E.W.M. Corbett, to provide designs for houses, ensuring consistency of character and status. These were erected by various local contractors, who introduced their own individual variations by selecting a wide range of materials available from builders' merchants. These included freestone mouldings from Bath stone quarries, pressed red bricks from Ruabon in Denbighshire, and decorative tiles from Midlands firms such as Maw & Co of Jackfield and Gibbons Hinton & Co of Brierley Hill, in addition to standard items such as iron balustrades, polished granite shafts and fish-scale tiles.

A reflected pair of 2½-storey 2-bay houses in the freestyle influenced by Norman Shaw's Old English style, of brick with Bath stone dressings (painted to No 81) and slate roof (renewed to No 80) with panelled brick stacks to the sides and rear. The entrances are in the narrower inner bays. Projecting porches have rusticated elliptical arches with moulded imposts, surmounted by elliptical keyed oculi. Inside, the porches have decorative tiles to the dado, half-glazed fielded panel doors (with stained glass to No 80), and side and overlights. Above the porches are balconies behind swan-necked pediments (removed to No 81) to brick parapets. The balconies have replaced windows. The wider outer bays have intermittent stone quoins in a notional rustication. Two-storey canted bays have 3-light mullioned and transomed windows, the upper lights having coloured glass above the transoms in the lower storey. In the upper storey are small-pane upper sashes with elliptical arches to the meeting rails, and single pane lower sashes. A broad rock-faced sandstone band between stories is wrapped around the angles. The canted bays support projecting gables, which are further supported by pairs of ornate diagonal wooden brackets on corbels. The gables are tile hung and incorporate bands of fish-scale tiles, projecting further forward on curved brackets above oriel windows. The oriel windows have paired sashes with elliptical arches to the meeting rails, with small-panes to the upper sash and single panes below.

The R side facing Morlais Street incorporates a separate dwelling (No 81a). This elevation has an external brick stack on the L side, terminating the sandstone band wrapped around the angle, and tile hanging beneath the eaves. Further R is a canted bay window, partly cut down to make a doorway. Above it are 2 windows under flat arches in the upper storey and a raked dormer. All have replaced glazing in original openings. To the R of the bay window are 2 segmental-headed 4-pane sash windows, above which is an oriel with replaced windows. A crenellated wall further R conceals a lean-to roof behind.

The residential district centred around Roath Park is of exceptional interest for its late Victorian and Edwardian middle-class housing, and is one of the 2 finest such developments in Wales.