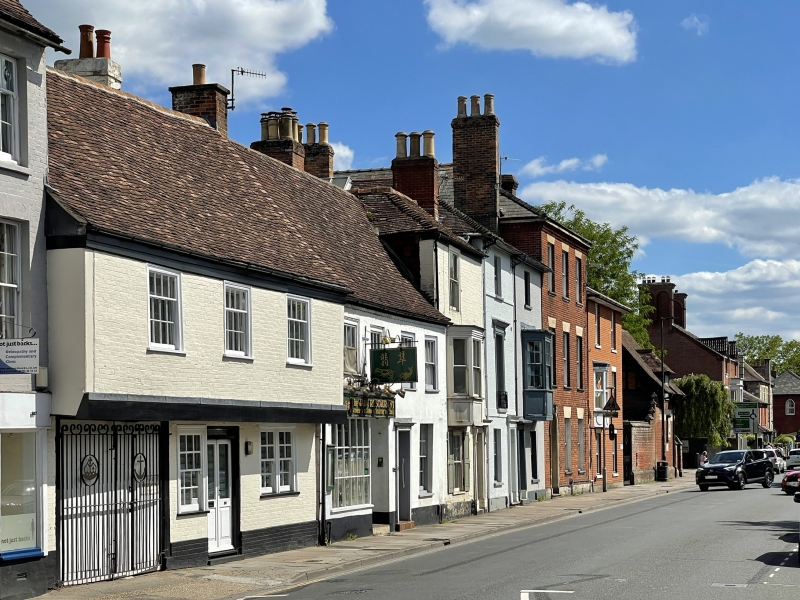 108 Exeter Street comprises of a timber framed townhouse originating from the C16, altered in the C18 and early C19 when it was in use as an inn, and converted back to a townhouse in 2003.

A timber framed townhouse originating from the C16, altered in the C18 and early C19, when it was in use as an inn, and converted in 2003 back to a dwelling.

MATERIALS: timber framed with brick infill and a tiled pitched roof with a moulded eaves band, and a chimney stack set in the rear roof slope.

PLAN: a rectangular plan with first floor continuing over the yard entrance to the left.

EXTERIOR: a two storey colour-washed brick front with over-sailing first floor. To the left is the yard entrance with decorative C20 cast iron gates with central anchor motif. To the right the ground floor has C19 sash windows flanking an early C19 glazed door in a moulded surround (this entrance is no longer used). The first floor has three three-by-four pane sash windows with flush architrave frames. An early C19 four-by-four pane sash window gives onto the passage to the left. Underneath, inside the passage, is a late C20 window and a doorway (now the main entrance to 108 Exeter Street).

INTERIOR: the interior retains its C16 timber partition walls and roof. The latter is a three-bay Queen strut roof, with tie beams and purlins. Carpenter's marks are clearly visible on at least five timbers on the first and second floor and graffiti on both floors. The later inserted chimney stack probably dates from the C18. There are some later repairs to the roof, including the replacement of two of its six curved wind braces in the late C20, but overall the roof has survived mostly intact.

108 Exeter Street (the front part of the former Crown and Anchor Inn), incorporates a timber framed town house built in the C16. Exeter Street was laid out in the C12 or C13 as the main southern approach to New Salisbury. Exeter Street was formerly, as recorded in 1339, known as Drakehallestret or Dragall Steet, apparently named after Drake's Hall, an important building in the street. The line of the street was conditioned by the presence of the Cathedral Close, bounding it to the east. Number 108 stands halfway along this street, opposite the Bishop's Gate, which gives access to the Cathedral Close. Attached to the south is a former townhouse of similar date.

108 Exeter Street was altered and extended in the C18, when it probably first became the Crown and Anchor Inn, with new outbuildings attached to the rear along a small courtyard. Further alterations took place in the C19 and C20. In 2003 the building was converted and extended to form three separate dwellings: 108 Exeter Street and the converted and much altered outbuildings of later date, now known as 1 & 2 Spire Mews (not of special interest). During the building works in 2003, the street front at first-floor level was found to be clad in mathematical tiles, now not visible.

* Architectural interest: as a particularly important survival of a C16 timber-framed, townhouse with jetty;

* Historic interest: it forms part of the late-medieval development of Salisbury, situated along its main approach, opposite the Cathedral Close;

* Group value: it forms part of a very important group of late-medieval buildings on Exeter Street in Salisbury.