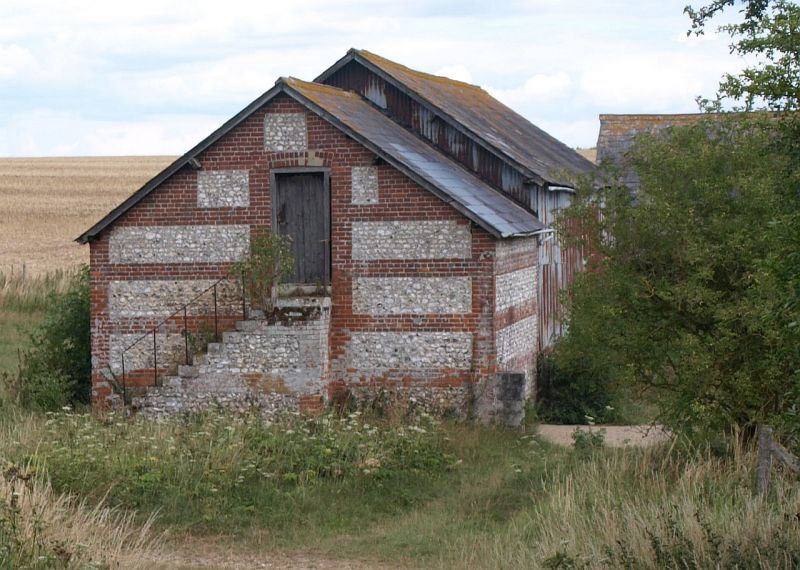 Isolated house, farmyard with barn, stable granary and sheltershed,
losed by walls. C19. Barn, on north side, of flint with brick
quoins, four course lacings, and stepped gables. Sides of weather-
boarding on timber framing. Slate roof. Six bays, with cartway
through third bay. Tie beam and king post trusses with struts and
single purlins. Roof extended to west over 2 bay cartshed with
granary over. Cartshed has cast iron columns, with entry from
outside yard. Granary has external stone staircase and floor
independently supported within carthsed. On east side, a 4 unequal
bay stable with tallet over, of similar construction, double doors
to yard and three windows, and pitching door in gable to rear.
Adjoining to south, an 8-bay sheltershed with cob rear wall and
corrugated iron roof. Yard enclosed by flint wall with integral
brick piers and tiled copings on south side, returning on west as a
cob wall also with tiled copings. All forms a traditional farm
group of early-mid C19 date. To south of sheltershed, former
farmhouse, now ruinous, three bays with extension to south of 1
bay, and a 2-bay 2-storey block added later C19 to east side. Poor
quality stone used for internal faces of walls. Adjacent to house,
a steel windpump without fan or tail. House and windpump are
outside yard and not included in group of special interest.