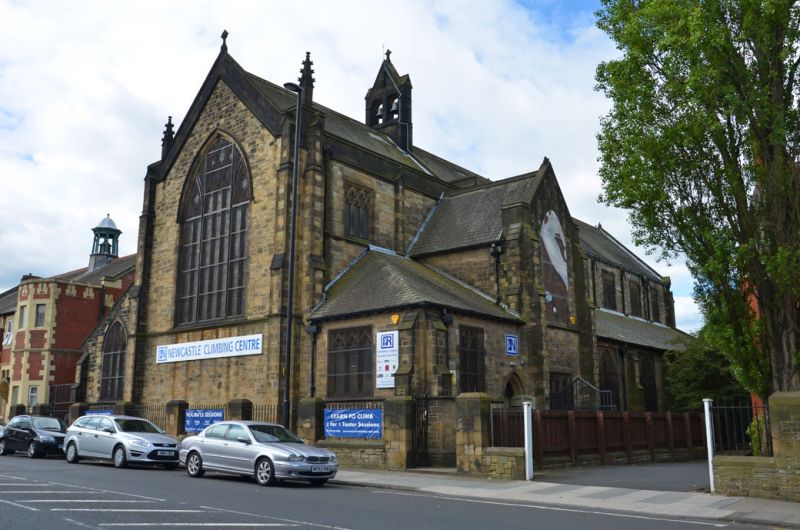 Former Parish Church. Designed 1904 by Hicks and Charlewood of Newcastle, built
1905-6 at the expense of W.D.Cruddas of Haughton Castle and consecrated
10th March 1906. Altered 1967. Nave and chancel divided by a bellcote. Nave
aisles with vestries and organ chamber. Sandstone ashlar with slate roofs.
Ashlar coped gables with kneelers and angle buttresses. Perpendicular
Revival style. East front has large 7-light pointed arch window with panel
tracery and hood mould. Angles topped by crocketed pinnacles and gable
topped by finial. To the left a lean-to with a 3-light pointed arch window
with panel tracery, to the right a 3-light flat-headed mullion window.
South front has 2 window chancel and 6 window nave with aisles and
clerestory. North front has 2 window chancel with single storey hipped roof
vestry, and 2 storey gabled organ chamber. Vestry has a 2-light mullion
window and a pointed arch doorway with hood mould, beyond the organ chamber
has a 3-light mullion window and above a tall 3-light pointed arch window
with hood mould. The nave has 5, 3-light pointed arch windows and to the
west a single pointed arch doorway with double doors and a wooden tracery
overlight. Above the clerestory has 5, 3-light flat-headed mullion windows
and a single 2-light window to the west. West front has a four light
pointed arch window with a central major mullion. On the roof between the
nave and chancel a gabled bellcote with 2 round headed bell openings.
Interior: 6 bay nave arcades with double chamfered pointed arches with
octagonal piers and responds. Elaborate wooden single hammer beam roof. The
west section of the nave has been partitioned off in 1967 to a hall,
meeting rooms, kitchens etc. Double chamfered pointed arch. Fittings
include temporary organ by Bishop & sons with wooden case. Wooden pews,
choir stalls and screens. Octagonal stone font decorated with panel
tracery, 1906 with a wooden font cover added 1933. Brass lectern 1906. East
window dedicated 8th June 1921 as a war memorial by John Charles Bevsey.