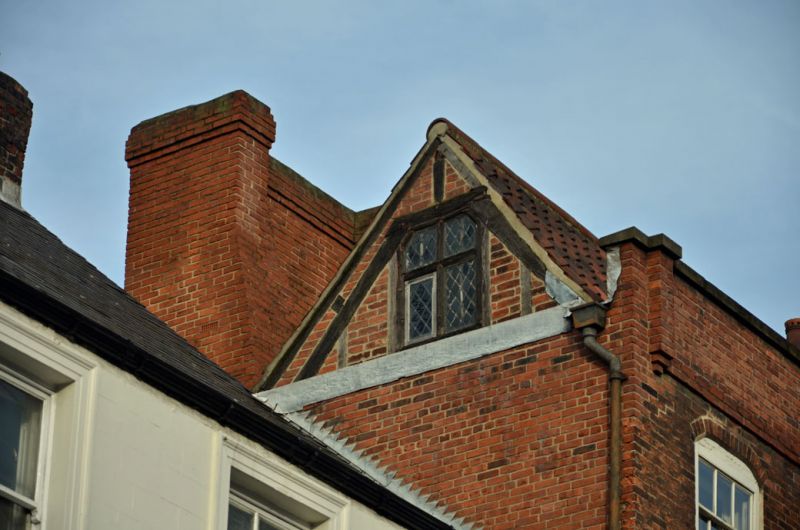 NZ 2563 NW NEWCASTLE UPON TYNE SANDHILL
(north side)
24/617 Nos. 41 and 44
14.6.54 (Bessie Surtees House
and Milbank House)
G.V. I
2 houses, later shops, now united. C16 and C17; left house refronted c.1721;
c.1931 alterations for Lord Gort. Timber: framed with painted render; left house
bright red brick with painted ashlar dressings; roof Welsh slate at front of right
house, pantiles at left; French tiles at rear. C19 shop at left with pedimented
doorcase at right end; No. 41 at right has central entrance with ledged and
battened door and wood-mullioned-and-transomed shop windows. Brick front contains
sashes with glazing bars and flat brick arches (except for elliptical heads on
top floor) and projecting stone sills. Floor level brick strings, that to second
floor moulded. Renewed top parapet with brick pilasters and stone coping. Right
house has full-width mullioned-and-transomed windows, with glazing bars and upper
casements, in bays defined by fluted pilasters and resting on long brackets to
moulded strings. Fifth floor is C19 alteration and has 3 large windows alternating
with bays of vertical framing. All floors above first are jettied on rendered
beam ends. Steeply-pitched roof of No. 44 has leaded casement in left return
gable; right end rear brick chimneys. Interior. Rear wing of No. 44 has upper
crucks. Front range of No. 41 has closed-string open-well staircase. Much
panelling; Jacobean chimney pieces, including one which originated in Cosyn's House,
Quayside, and came here via Eastfield Hall, Warkworth. Rear wing of No. 41 rebuilt
for Lord Gort, incorporating many genuine C17 features from other houses; at this
time the first floor ceiling, in Jacobean style, was added to the main house.
Historical note; famous as the house from which Bessie Surtees, a merchant's
daughter, eloped with the future Lord Eldon, Chancellor of England. Being
restored at time of survey.
Nos. 42 and 43 are subsumed in this house.