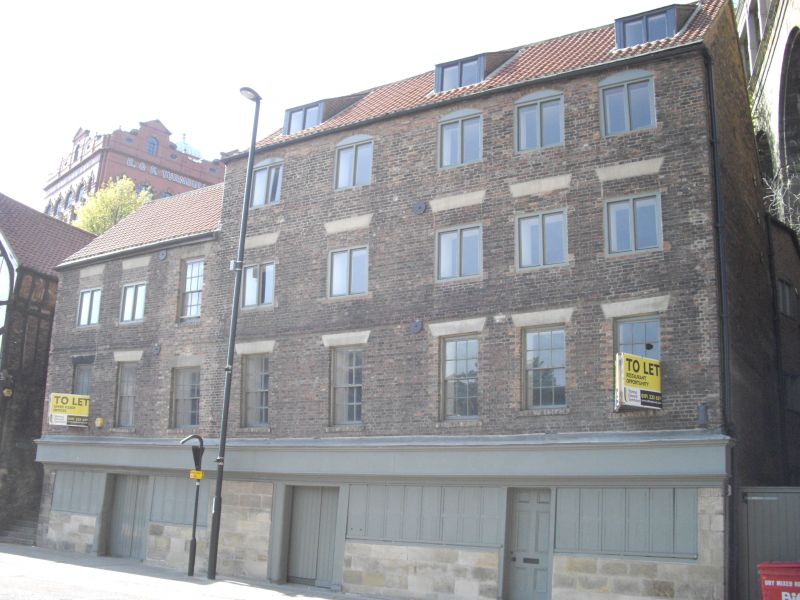 Large late C16 merchant's house, altered. Dressed stone ground floor, upper
facade of C18 or early C19 English bond brick with a second floor band. Pantiled
roof. Late Cl7 timber-framed rear extension rests on an older stone base and
re-uses some original windows. Brick nogging and a corrugated iron roof.
Front of No. 28 four storeys, five bays; No. 30 three storeys, three bays. Plain
door and sash windows, some with glazing bars. Inside the unity may be seen.
The first and second floors of the front range each consist of one enormous room
whose chief feature is a ceiling of close-set beams completely plastered, with
quasi-classical side mouldings and bands of renaissance ornament below and
between. Paired birds, flowers, scrolls and arabesque patterns involving animals
appear. The thistle is a frequent motif. The ornament may be compared to C16
Scottish painted work. A contemporary stone fireplace with flattened Tudor arch
and sharp shallow roll mouldings is on first floor. Stone mullioned windows of
two, three and five lights have a double hollow chamfer. In the rear extension
is a handsome oak staircase with urn and spiral turned balusters, thick moulded
handrail, and moulded closed string. The ground floor is high and plain,
suggesting that it may always have had a mercantile use. Much of the second
floor ceiling had fallen down and the building was in poor condition at time of
survey.