A Grade II Listed Building in Newburn, Newcastle upon Tyne 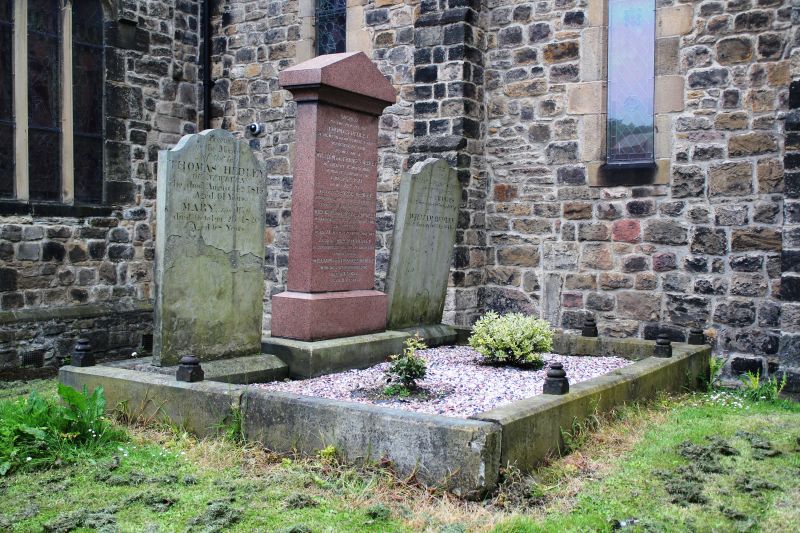 Entry Name: Hedley Tombs About One Metre South of Church of St Michael and All Angels

7/27 (inset) Hedley tombs about one
metre south of Church of
St. Michael and All Angels.

3 headstones in walled enclosure. Members of the Hedley family died 1813-1888.
Pink granite headstone on sandstone base flanked by sandstone headstones and enclosed
by dwarf sandstone wall. Shaped tops to sandstone headstones on chamfered bases, that
at left inscribed to commemorate Thomas of Newburn died 1813 and his wife Mary died
1820, that at right William died 1843 and Frances his wife died 1836 and their family;
central pedimented slab commemorate Thomas, barrister, of Newcastle, second son of
William and Frances died 1877 and his brothers, George and William of Burnhopeside Hall,
Durham. Historical note: William Hedley died 1843 was a pioneer in the development
of railway locomotive engines; he demonstrated that smooth wheels could adhere to iron
rails and built "Puffing Billy" in 1813 for use on the Wylam waggonway. Source: Gard
and Hartley Railways in the Making University of Newcastle Archive Teaching Unit No. 3,
Newcastle 1969.