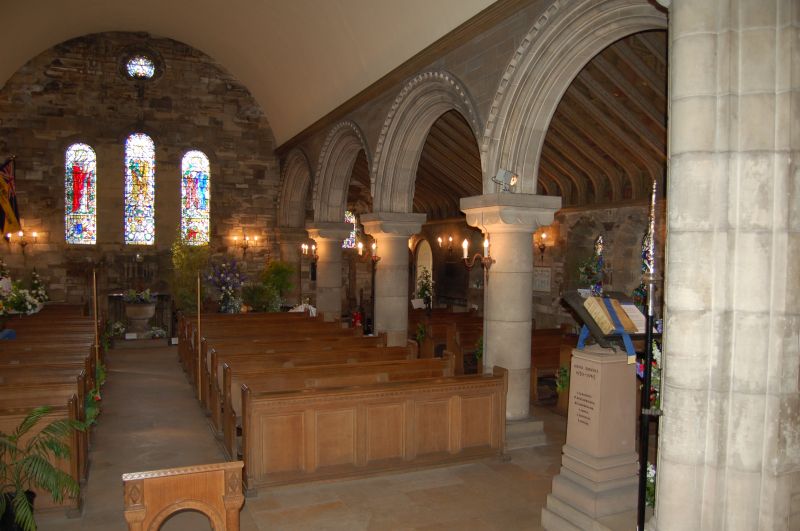 Parish church, 1913-16. Designed by Mr. McIntyre, approved with
a few modifications, by Louis Ambler for the Duke of Portland.
Based on Steetley, Derbyshire. Rock-faced ashlar with ashlar
dressings. Slate roofs. Single rock-faced ashlar stack to the
north east. Stone coped gables and kneelers. 2 moulded ashlar
eaves bands. Bellcote, surmounted by a cross, at the west gable,
with a further ridge cross at the east end. Buttressed. Nave,
north aisle, north porch, north vestry/organ chamber, chancel and
east apse. Set into a recessed panel at the west end is a
central arched light, flanked by single, similar, smaller lights,
each being flanked by a single engaged column with cushion
capital supporting an arch of chevron and an arch of billet. All
3 are contained in a flush ashlar quoin surround. Under is a
string course. Above is a Lombard frieze, with an oeil de boeuf
in raised ashlar surround over. To the left is a lean-to, with
single small arched light in flush ashlar quoin surround. This
extends into the gabled porch with stone coping and kneelers. A
band of dentil runs under the gable which has carved lozenge
decoration. Central arched doorway with 2 engaged columns either
side, each with cushion capital supporting an inner arch of key
pattern and an outer arch of chevron with nodules. Each of the
side walls has a single small arched light in flush ashlar quoin
surround. The inner porch doorway is arched. The north nave
wall, with sill band which extends around the north and east
vestry walls, has 5 small arched lights in flush ashlar quoin
surrounds. The projecting vestry has 2 gables to the north
front. There are 2 pairs of arched lights with flush ashlar
quoin surrounds. The east wall has an arched doorway with 3
small arched lights in flush ashlar quoin surrounds to the left.
The east chancel has 3 small arched openings with flush ashlar
surround in the gable apex. The semi-circular apse with dentil
and moulded, raised ashlar eaves bands and sill and impost bands
has 3 small arched lights each flanked by single engaged columns
with cushion capitals supporting a single arch of billet
moulding. The south chancel has 2 arched lights with flush
ashlar quoin surrounds and sill band. The south nave has 4
larger arched lights with similar surrounds and sill band.
Interior. 4 bay nave arcade with round columns and scalloped
capitals support round arches with billet moulding over. The
moulded north aisle/organ chamber and chancel/organ chamber
arches are each supported on 2 responds with capitals decorated
with mythical animals. The moulded chancel arch decorated with
key pattern, chevron and billet is supported either side on 3
engaged columns with similar fanciful capitals. The apse arch is
decorated with key pattern and is supported either side on 2
columns with similar fanciful decorated capitals. The beamed
roofs of the apse and north aisle have narrow decorated and
coloured panels. The ashlar colonnaded and decorated altar rails
are decorated with wooden carved angel heads. The stone altar
has an arcaded front. The 1931 oak pulpit is decoratively carved
and the stone font has a bronze cover designed by William Reid
Dick, 1921. On the west wall is a wooden collection box with
carved Madonna over, to William Lord Lovat 18 Feb 1933. The 1919
memorial lectern is decorated with a bronze eagle by Walter
Gilbert. In the nave is a decorative wood and iron chest dated
1930. In the apse are 2 carved chairs. There are several silver
lanterns, crosses and candlesticks, some by Bainbridge Williams,
1927. The lantern in the chancel is C17 Dutch. On the north
aisle wall is a memorial tablet to Ottoline Morrell by E. Gill,
1939. There is a tablet to Major Lord William Augustus
Cavendish Bentinck on the south chancel wall. On the north
chancel wall is a Garter Banner belonging to the Dukes of
Portland. The stained glass in the apse and chancel is by Mr.
Meteyard of Birmingham.