Broadhurst Manor Including Attached Walls to East and West 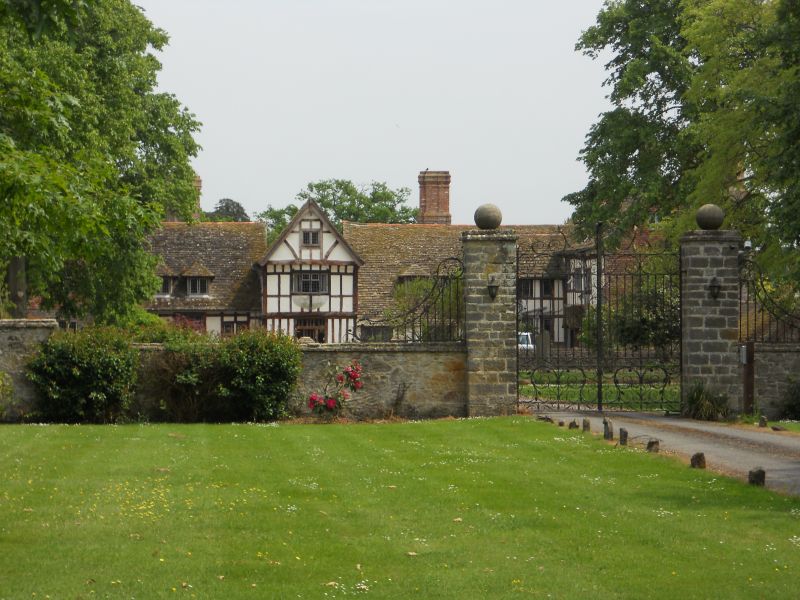 Large house. Late C16, the remaining part of a mansion the rest of which was demolished circa 1780, restored and greatly enlarged in 1934. There was some re-fenestration in the late C17 and some late C19 and early C20 internal fittings and refenestration. The southern part is the original building with a 1930s matching wing in similar style and building materials added to the north. West front timberframed with plastered infill, south front of red brick with grey headers, northern and southern gable of east front tile-hung and remainder of the southern front red brick with stone dressings. The roof is entirely hung with Horsham stone slabs except for the south facing slope which is tiled and there are six tall clustered brick chimneystacks. Plan is now U-shaped with original part of the building an L-shape.
ENTRANCE FRONT: North side of south wing is of box-framed timberframing with plastered infill. Two storeys and attics with one hipped dormer and irregular C19 casements. Deep brick plinth. Early C20 gabled wood and brick porch to right with pendant and C20 plank door. Attached to north wall is a brick wall with two-centred early C20 stone archway dated 1926 with the initials JC. Two storey timber framed c1934 extension in angle of west face of entrance front. West front then has a further early C20 leanto built on to original part of the building with two hipped dormers. In the centre of the entrance front is a timberframed section of one bay of two storeys and attics which was erected in 1934 but reusing old timbers, possibly from a gatehouse. This has bargeboards and pendant, coved cornice above first floor, oriel window, box frame to first floor and close-studding to ground floor. The north wing is of the 1930s, L-shaped in matching building materials to the origiinal part of the house, to the right timberframed with plastered infill of one storey and attics with two hipped dormers and to left a projecting wing of one bay of red brick with stone dressings to ground floor and tile-hung above.
SOUTH FRONT: Two storeys and attics of red brick with grey headers and incorporates three massive external chimneystacks built of stone with brick tops, the central one having two small mullioned windows with leaded lights to the principal bedroom on the first floor. Late C17 leaded light casements with cambered brick heads, brick band, stone plinth and C19 lead rainwaterhead.
EAST FRONT. Southern part in original building of three storeys and attics in red brick with stone dressings except for upper part of southern gable which is tile-hung. Lower floor windows are C17 stone mullioned windows, the other windows original mullioned windows re-cut. Attached wall to south west corner has C17 English bond brickwork and C19 two-centred stone arch with blank panels. Northern part is 1930s wing comprising central gable with oriel window and arched entrance flanked by sidelights and right side wing of two storeys and attics in red brick with stone dressings, three windows and massive central external stone chimneystack.
INTERIOR: Fine late C16 oak main staircase from cellar to attics, with square balusters, square newel post and carved knop to cellar and top floor, and two very rare wooden siege doors at the top. Exposed framing with carpenters' marks. Brick cellar with slate shelves. Dining Room has 1930s linenfold panelling. Library has late C19 panelling, ceiling with chamfered floor joists and overmantel with Jacobean carving in C17 style. Herb Room has C19 stone fireplace and cupboard. Room adjoining Herb Room has four-centred late C16 fireplace with Tudor roses in the spandrels, overmantel with three round-headed arches, fluted pilasters and mutule frieze. Ballroom has stone fireplace and panelling of 1930s date. First floor has exposed framing with carpenters' marks. Principal bedroom has stone late C16 fireplace some C17 panelling, C19 panelling and a cupboard lined with old Delft tiles. Alcove behind fireplace with windows could perhaps have been used as a powder closet. Dressing Room off has C19 panelling and cupboard. Guest bedroom approached up a separate flight of stairs has early C20 brick fireplace with wooden bressumer and two plank doors with large hinges and latches.
HISTORY: Manor belonged to Michelborne family until 1656 when it was sold to Edward Lightmaker the elder, citizen and brewer of London. His will of 1658 bequeathed among other items "my iron furnace called Horsted Ffurnace, and the watermill near unto the same adjoyning, to my wife Saphirah". Saphirah was sister to Robert Leighton, Archbishop of Glasgow, who lived with her in Broadhurst Manor on his retirement from 1674 to 1684. Alterations and extensions to the house in the 1920s and 1930s were carried out by the Clark family.