A Grade I Listed Building in Broadwater, West Sussex 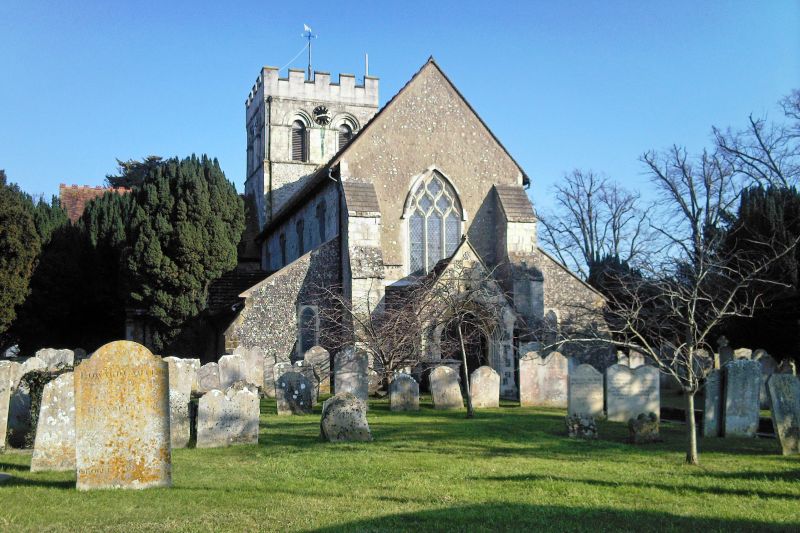 PLAN: Cruciform plan comprising long clerestoried four-bay nave with lean-to aisles, central crossing tower and transepts, long four-bay chancel; gabled C19 vestry off the E wall of the S transept. The transepts may be a rebuilding of earlier two-storey transepts on the basis of blocked door and possible window opening at a high level. Each transept had three small apsidal chapels on its E side, of which openings can be seen internally.

EXTERIOR: W elevation flanked by large offset buttresses. Gabled porch (dated 1887) built in similar style to N porch (see below) but with flint and stone chequerwork and hollow-chamfered quoins inset with tiny ball-flowers. Window above with reticulated tracery. W ends of the aisles rebuilt in knapped flint. The buttressed aisles have small two-light windows in square-headed surrounds; two-light clerestory windows with segmental hood moulds. The S side preserves one lancet window. N porch is faced in knapped flint, with stone quoins and recessed pointed arch. Circular opening on W side. The transepts have angle buttresses, the N transept with three W lancets and one in the N wall; the S transept with lancets on the W side and one on the S. The belfry stage of the low crossing tower has pointed arches with nook shafts enclosing round arches; crenellated parapet of c1830 but rebuilt 1989. C19 lancets to N and S walls of chancel. E wall is buttressed. 1850s triple-lancet E window replaced a C14 four-light window but probably set within same opening; single lancet in gable.

INTERIOR: Nave arcades have Transitional circular columns but with C15 bases, moulded octagonal capitals and double-chamfered arches. Nave and transept roofs date from mid C19 restoration, with tie-beam and crown-post trusses; aisle roofs also C19. Corbels and traces of steps to rood loft visible at E end. Ceiling of crossing tower has large cross beams supporting planks of irregular widths and may be late medieval. The crossing tower arches are very fine. The W arch was reconstructed in the C14 to form a lower, smaller-span pointed arch, thought to be part of strengthening measures when the tower became unstable, but preserving late-Norman rich decoration of zig-zags and tiny beakheads, including carving on the soffit, an unusual feature. The original arch position can be seen above. The original round-headed E arch is also soffit-carved and preserves its nook shafts and richly-carved capitals. Low, stout C15 blind-traceried gates to the chancel appear to have been the lower section of a screen. The choir arrangement may date from the 1825-27 restoration by Edward Hide. Returns on W wall each have three late-medieval stalls with misericords, carved on the underside with roses and faces alternately. A pre-1850s painting in the church shows that there were more stalls (along the S wall at least); one survives modified as a chair in the chancel. Blind-traceried dado to choir with carved frontals, the ends with poppyhead finials; additional later C19 open-traceried frontals in front. Fine quadripartite rib vault to the chancel on short shafts with moulded capitals and bases and hooked finials to ribs. The bases are part of a late-C12 decorated string course at cill level which extends all round the chancel. E window set in carved frame; stained glass by E Willement. 1860s sanctuary embellishment in Early-English style includes a three-bay reredos with trefoil-headed openings framing panels of the Lord's Prayer and Creed, the openings carried on black marble shafts with good-quality C19 stiff-leaf capitals. Blind arcading on the E wall frames a panel with the text of the Commandments and returns down the N and S walls. The arcading is finely carved with slender shafts and has decorative tiling behind. Open arcaded altar table, probably also 1850s-60s and similar design to the sanctuary rails. Encaustic floor tiles.

OTHER FITTINGS AND MONUMENTS: Simple nave benches with square ends; square Caen stone pulpit with carved sides and canted corners decorated with marble shafts, both from 1860s restoration. The octagonal late-C15 style stone font is a modern reproduction. Monuments include brasses, most notably a very fine brass of John Mapilton, Rector of Broadwater (d 1432) in the chancel floor, depicting coped figure standing under canopy, and numerous wall tablets. On N wall of chancel a richly-carved stone canopied tomb to Thomas, 5th Earl de la Warre (d 1524): comprising a three-part canopy with crocketed ogee heads and heavy pendants, but with with Renaissance motifs. E wall of S transept has stone tomb to Thomas, son of the above (d 1554). Substantial monument comprising a slightly projecting table of three panels, each of which originally had a carved figure; a retable of three panels with figures of the Virgin and Child to left and St George to right, the central panel obliterated but may have depicted Christ in Majesty; surmounted by a canopy with a coved frieze carved with shields and coats of arms. While defaced, this is a fine and rare example of a tomb of the reign of Queen Mary; while incorporating Renaissance motifs, it is predominantly late-Gothic in its style and religious imagery.

HISTORY: The Domesday Book of 1086 records a church at Broadwater. A Saxon doorway is reported to have been uncovered at St Mary's Church during 1930s repairs. The village lay centrally between the settlements of Worthing, Offington and Little Broadwater, and the church's size - it is one of the largest cruciform parish churches in England - suggests that it was meant to serve a relatively large population. The earliest part of the present church: the lower part of the crossing tower, is c1150-60. The tower was heightened in the late C12, at which time the transepts were probably added. Each transept had three small absidal chapels on the east side. The chancel and nave were rebuilt, probably on a larger scale, in the next hundred years. The church subsequently underwent relatively minor alterations. A W gallery was installed in 1819, and in 1825-27 further alterations including aisle galleries were made under the local architect Edward Hide of Worthing, including the removal of the short, shingled spire, demolition of the S transept chapels, addition of aisle galleries, reseating with box pews and The choir fittings too may date from this time; they are shown on Hide's drawings of the proposed works and predate Victorian restoration work The church underwent two phases of restoration under Charles Hide (son of Edward Hide). In the 1850s (before 1855) the galleries were removed and the pews replaced with benches, and the C14 four-light window replaced with triple lancets. In 1862-66 the chancel was strengthened and the sanctuary embellished; the two-light windows replaced with lancets. It is unclear when the N transept chapels were removed. W front rebuilt in 1887 with the addition of a new porch.

REASON FOR DESIGNATION: The Church of St Mary, Broadwater, is designated at Grade I for the following principal reasons:
* Of outstanding interest for the extent, quality and decorative liveliness of the mid-late C12 fabric, and for substantial survival of C13 and later medieval work;
* Interior features of interest include the early C19 choir fittings incorporating late-medieval misericords, and several monuments, three of which: the Mapilton brass and the two C16 de la Warre tombs, are outstanding;
* The mid C19 work in the sanctuary is well-designed