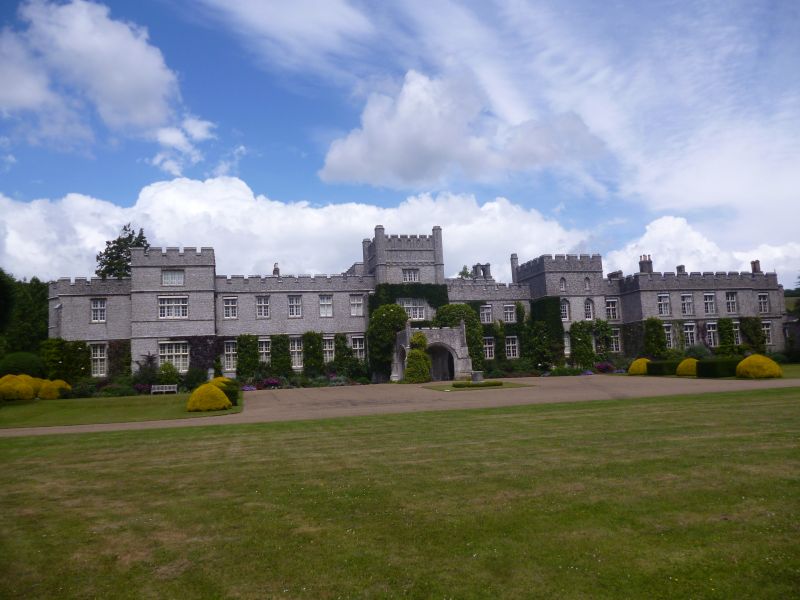 In 1804 James Wyatt built a house here for Lord Selsey on the site of an
older building. This was greatly enlarged by Sir Ernest George and Harold
Peto for it D James in 1893. Of Wyatt's building the facade of the west wing,
to the left of the main entrance and of the porte cochere, survives more or
less intact. This has 2 storeys and 5 windows, then a tower of 3 storeys
and one window, and then one more window bay of 2 storeys. It is built of
knapped flints with a castellated parapet over it. Casement windows with
stone mullions and transoms. The original pointed window and gable over the
front door has been replaced by a tower. To the east of this was a corridor
on the ground floor only leading to another tower of 2 storeys with sash win-
dows having pointed heads. This has been filled in by the east wing built in
1893 but the pointed sash windows of the tower survive, though this is now
of 3 storeys instead of two. Attached to it behind is a round turret con-
taining a circular staircase. The service wing behind also dates from
Wyatt's time. Almost the whole of the interior was remodelled in 1893 in
the most sumptous style of that period though partly in imitation of French
eighteenth century decoration. But some of the chimney pieces of 1804 sur-
vive in one or two of the less important rooms. There is also a subsidiary
staircase of this period. King Edward VII stayed here frequently with Mr
& Mrs William James, who were great friends of his.