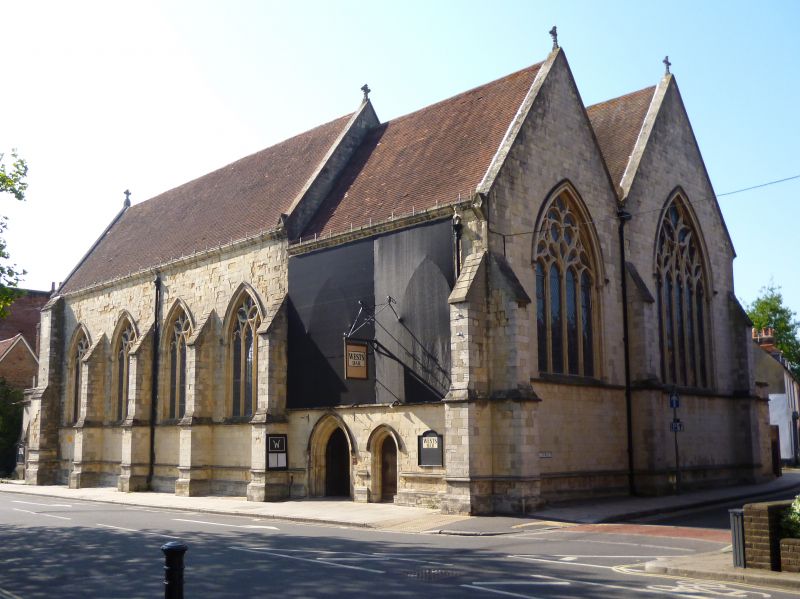 MATERIALS: Coursed ashlar masonry. Red clay tiled roofs except for the N aisle which is slated.

EXTERIOR: The S side fronting West Street consists of the S aisle, with the four bays demarcated by buttresses and each with a three-light curvilinear window (all with the same design); a two-bay chancel aisle, unbuttressed and with two two-light windows, again with curvilinear tracery (same design as one another), and beneath these two doorways; a W narthex under a hipped roof and with a Decorated style doorway with foliage detail in the hollow of the head and polygonal responds. The nave/chancel and S aisle/S chapel are under their own gabled roofs. The E windows of the church have rich curvilinear tracery, the chancel aisle having four lights and the chancel five. There are no parapets to the principal components of the building although there are plain ones to the narthex and vestry. There is no clerestory.

INTERIOR: The aisle arcades are well-proportioned with four filleted shafts to each pier, moulded capitals and moulded arches. The tall chancel arch is in a similar style and the chancel is divided from the aisle by a two-bay arcade. The nave has a good open roof of eight closely-spaced arch-braced trusses with two tiers of wind braces; there are similar roofs to the aisles and S chapel. In the chancel there is a boarded tunnel vault. The interior has been subdivided into different areas using altered floor levels and low screens

PRINCIPAL FIXTURES: The building, having been converted to a public house, has lost its ecclesiastical fittings

HISTORY: The church, built in 1848-52, was designed by Richard Cromwell Carpenter (1812-55), one of the most important church architects in the early Victorian years. He was one of the leaders in the adoption of archaeologically faithful Gothic architecture, as promoted by A W N Pugin and the influential Cambridge Camden Society. He was, with William Butterfield, one of that society's most favoured architects. He died young and his practice was taken over by William Slater (1818 or '19-72).

The building is a beautifully designed essay in early C14 Gothic. Its refined lines and details are of the kind that would resurface with the architecture of G F Bodley and his followers twenty years later and be typical of the late Gothic Revival. The church suffered bomb damage in WW2

REASONS FOR DESIGNATION:
Former Church of St Peter the Great, West Street, Chichester is designated at Grade II the following principal reason:
* It is a very good example of early Victorian church-building in an archaeological faithful style, designed by a noted architect of the day.
* The architectural quality, especially externally, is intact, its conversion to a pub notwithstanding.