A Grade I Listed Building in Compton, Surrey 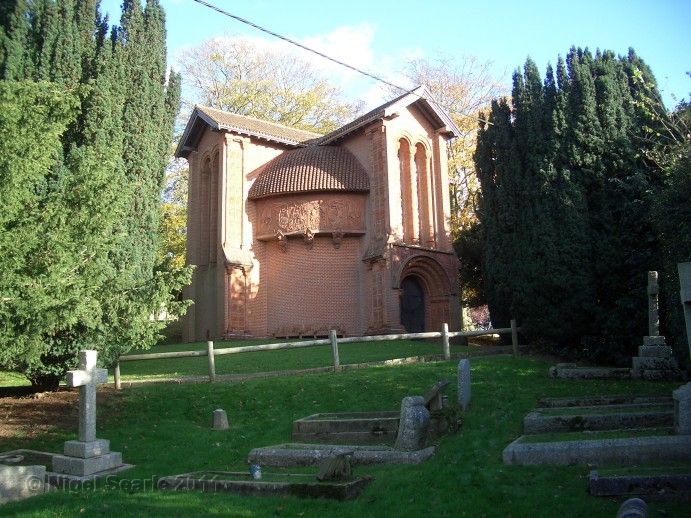 Mortuary chapel for new cemetery. Built by Mary Seton Watts and the
villagers of Compton between 1896 and 1898, interior decorated in 1901.
Local red brick with rubbed and cut brick decorations, pantiled roof.
Greek cross plan within a circle. Each arm of the cross has two round-
arched headed windows on the end with one step surrounds, Romanesque
style. Foliage capitals to tall jamb shafts and open gable end over.
Buttress to base of arms have paired shafts with Romanesque capitals and
terracotta decoration between. Between each arm of the cross the curved
quadrant section of the circular walling is corbelled out on first floor
level with a curved roof over. Each quandrant has three winged figures
as corbels and intricate flowing terracotta work above. Square bell
turret with arched openings on each side and open gable ends containing
further terracotta decoration to south east corner. Round headed,
one step door surround to south west arm with doubled carved and panelled
doors. Curved and flowing terracotta benches attached to walls of chapel.

Interior: Decorated in Art Nouveau style with complex symbolism. The
plan is a circle with four deep embrasures representing the arms of the
cross, vaulted over by pairs of thick parallel ribs (cf. Monks' Kitchen,
Durham). Gesso decoration in sombre blues and reds of elongated angels
carrying cameos in ornate frames looping down and linked to form a chain.
More angels above with cherubs' heads on the ribs of the vault. Tree of
life motif with roots intertwined to form a dado frieze around the bottom
of the wall, at the top of the wall benches. Altar recess gilded containing
"The All Rewarding" by G F Watts. Altar inscribed "This chapel designed
by Mrs Watts, wife of G F Watts OMRA, was built in 1896 by her and the
people of Compton. It is dedicated to the memory of all who rest near its
walls.'

The Chapel was built at the expense of Watts in grounds designed to replace
the old churchyard which was closed in 1895.