A Grade I Listed Building in Ufford, Suffolk 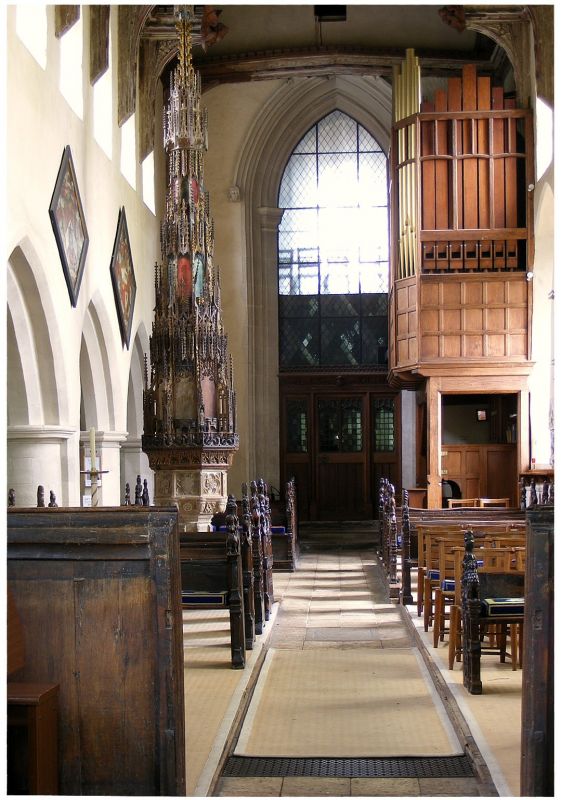 Church of England Parish: Ufford St Mary of the Assumption

I
Church. Late C12, early C13 and C15 with C19 additions. Flint rubble with
ashlar dressings and a lead and slate roof. West tower, nave with south
aisle, chancel and North-eastern vestry. Tower: West face: diagonal
buttresses to the corner which die back by 3 offsets and rise to diamond-
section crocketed pinnacles. Ashlar quoins to the outer and inner corners.
Slightly projecting plinth with an arcade of rectangular flushwork panels.
Chequerboard flushwork panels to the outer faces of the buttresses.
Central doorway with richly moulded surround with cavetto and ogee moulds
and cavetto-moulded hood mould set with small fleurons. Ashlar and flint
voussoirs above. C19 ashlar shield in square frame above this. Two-light
Perpendicular window to the first stage with cinquefoil heads to the lights
and panel tracery above with hood mould ending in figurehead label stops.
Recessed niches above this with blind tracery and ogee cinquefoil head.
Cusped lancets with square hood mould to the next stage and above that a
circular metal clockface, slightly domed. String course at the level of
the sill of the belfry opening which is of 3 lights, each cinquefoil, with
panel tracery above. Further string below the battlemented parapet which
has ashlar coping. South face: the lower body is plain, save for the
canted staircase turret at right which dies back below the level of the
belfry opening. North face: similar save for the absence of turret.
Single quatrefoil light to the lower body. Nave: south face: aisle of 4
bays. Porch at left of centre with a projecting plinth and rich flushwork
decoration showing shields, with star surround, quatrefoils, mouchettes
above encircled roundels and crowned chalice and wafer motifs. Panels of
flushwork tracery to either side of the central doorway which has
colonettes to the outer face and imposts with moulded bases and capitals.
Cavetto, beek and ogee moulds to the arch and in the spandrels are figures
of St George and the dragon. Above the door 3 canopied niches with
miniature vaults and crocketed pinacles. Blind tracery panels to the
parapet of the shallow gable. The west face of this porch has further
arcaded panels of flushwork with a central 2-light window with ogee heads
and panel tracery above. Gargoyle at left. East face of the porch is
plainer, of knapped flint with similar 2-light window. To left a 3-light
Perpendicular window with rendered brick surround having cinquefoil heads
to the lights and tracery. At right are 2 ashlar window surrounds, also
Perpendicular having cinquefoil heads with brattished transoms and divided
by buttress with 2 offsets. Clerestory of 8 windows, each of 3 lights with
brattished transoms and cinquefoil heads. Continuous hood mould and brick
voussoirs. North face: walling of rubble flint with some herringbone work
to the lower body. 3 bays with ½-bays to either side, divided by
buttresses which die back via 3 offsets. Further buttress to corner. The
3 central bays have paired windows to the clerestory, each of 2 lights and
similar to those of the North face. Single clerestory windows at right and
left. The three central bays each have a single lower window, that at left
being a 2-light Y-tracery window with renewed ashlar surround. To right of
this are 2 Perpendicular windows with cinquefoil heads to the lights and
panel tracery above. Chancel: south face: 2 bays divided by a buttress
with 3 offsets having windows of 3 lights with cinquefoil heads, similar to
the south aisle windows. Between these and at left of the buttress is a
Romanesque window which has colonettes to either side with moulded capitals
with pointed leaf decoration. Later pointed arch above with a hood mould
and figurehead label stops. North face: similar Perpendicular window at
right with brick voussoirs and to left of this a projecting single-storey
gabled C19 vestry with 3-light window in wooden frame to the gable end.
East end: diagonal buttresses, central C19 Perpendicular window of 4 lights
with cinquefoil heads and panel tracery. The east end of the south aisle
has a 3-light window with ogee trefoil heads and daggers to the tracery
above.

Interior: Porch: roof of 2 bays with wall posts having lost their pendant
bosses. These connect by arch braces to the principals and purlins.
Moulded common rafters and cornice with fleurons and brattishing. Church
door set in diapered walling with square ashlar panels (probably of C19
date). Door surround is chamfered and roll moulded. Plank door with
central domed knocker plate attached to a strap hinge (somewhat similar to
that of Church of St Botolph, Burgh). Nave: roof of 8 bays. 4 main and 4
subsidiary trusses, the subsidiary bays having tie beams which have been
cut back to form false hammer beams. Richly moulded wall posts sawn off
obliquely to their lower body. Arched braces connect these to the cambered
tie beams which have brattished enrichment to the tops. Further arched
braces connect these to the principals. The subsidiary bays have angel
bosses attached to the ends of the sawn hammer beams. These nearest the
chancel have a pair of German wooden angels of C17 date and the other bays
have English Baroque winged cherubs heads. Considerable painting survives
to the roof including chevrons and the sacred initials and monograms.
Tower arch has an outer hollow chamfer and ogee mould and an inner arch
which has semi-octagonal piers with moulded bases and caps at either side
with a wave-moulded arch. Font: octagonal stem and bowl raised about 2
steps. Buttressed corners to the stem and cherubs heads below the bowl
with interlacing wings. Roses in quatrefoils and shields to the panels of
the bowl still showing some original colouring. Canopy to the font of
great richness and complexity consisting of 3 stages, each with canopied
niches containing image stools, the niches having painted backs. Richly
crocketed finials. The lowest level has a traceried overhanging lip on
which rest miniature flying buttresss with tracery to their arches. To the
top a carving of a pelican in her piety with outstretched wings. The
lowest tier telescopes up around the upper tiers. Series of 17 benches to
the body of the nave with medieval ends. Dividing the nave and chancel is
the lower body of a rood screen divided into pairs of panels by buttresses.
Painted figures of saints to the panels and tracery above. Three stalls
mainly rebuilt in C19. with misericords. Chancel roof of 6 bays with
moulded wall posts, arched braces connecting with the principals and
pendant posts from which further arched braces connect to the brattished
collar. Arched braces also rise to meet the upper and lower purlins which
are brattished to their tops. Shields to the lower level of the pendant
beams (perhaps C19) showing representations of the implements of the
passion. Richly moulded cornice with tracery, fleurons and angels with
outspread wings. The chancel floor has been raised at the eastern end and
a medieval piscina to the lower body of the south eastern window has a
cusped round-headed arch opening into the choir and a 1/2-arch to the window
embrasure. Fragments of Medieval stained glass to the east window with
C19 additions creating images of St Salome and St Anne. C17 English and
German glass to other chancel windows. Pament tiling to nave and chancel
with fragments of medieval brasses now much worn.