A Grade I Listed Building in Framlingham, Suffolk 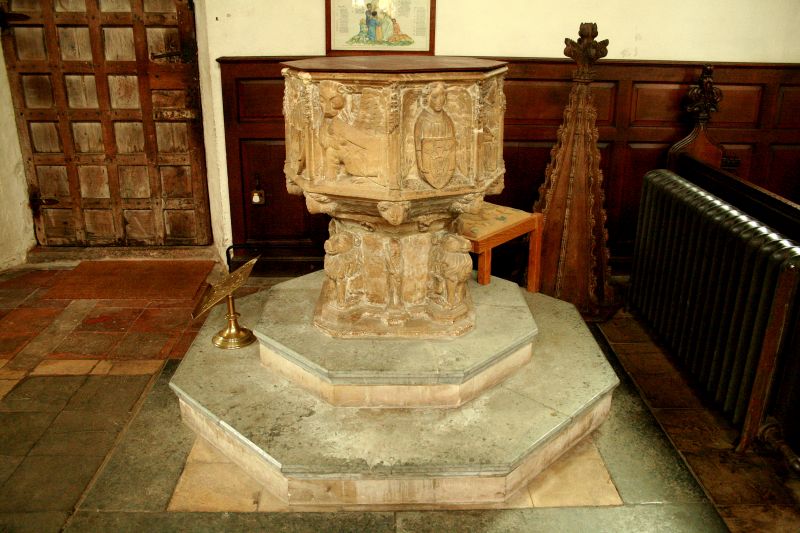 Parish church. C15 and C16, with fragments of C12. Nave and chancel, north
and south aisles, north and south chapels, south porch and west tower. Flint
and freestone with lead-covered roofs. Large square late Perpendicular tower
in 3 stages, divided by string-courses; flushwork panelling on the base, and
on the faces of the diagonal buttresses, which are stepped in 6 stages, 2 to
each of the main stages of the tower, and surmounted by heraldic lions; a 4-
light window with panel tracery to each face of the top stage. A battlemented
top with pinnacles at the angles and 2 bands of flushwork below. The tower
contains 8 bells, the earliest dated 1583. The nave roof has an ornamental
eaves cresting, and inscriptions below the eaves copied from a Parisian
church: these were added during the lace C19 restoration. 5 3-light windows
with panel tracery and with flushwork panels between them to the clerestorey.
The walling above in a mixture of scone blocks and flint. Parapeced aisle
roofs; 2-light traceried windows with square heads to the south aisle. The
chancel was lengthened and the 2 chapels built by the 3rd Duke of Norfolk
circa 1550, and as a result the chancel is almost as long as the nave, and the
east end of the church wider than the rest. 4 3-light windows with bar
tracery to the chapels; the 6-light east window, with a row of shields below,
dates from 1743. Battlemented south porch. The church has an impressive
interior, with many important features and fittings. Outstanding is the nave
roof, of single hammer-beam construction; the hammers are concealed behind an
ornamental ribbed coving with a horizontal decorated band above; the collars
are embattled and supported by solid arched braces. At the rear of the nave,
the organ, built by Thamar of Peterborough in 1674 for Pembroke College,
Cambridge, and presented by them to Framlingham church in 1708, was replaced
on its gallery in 1970. The organ case and the complete set of painted pipes
dare from 1630. The high C12 chancel arch is a survival of the earlier
church, and a row of corbel-heads below the level of the present corbels
supporting the aisle roofs indicate the presence of earlier aisles. In the
chancel, the reredos behind the high altar has a mystical painting of the
Glory, of about 1700. The north ana south chapels contain a group of
important monuments to the Howards, described by Pevsner as 'one of the best
series of mid-C16 Early Renaissance monuments in Englana'. The tomb-chest of
Thomas Howard, 3rd Duke of Norfolk, is particularly fine, and said to rival
the best French work. Details of all the monuments, and of many other
features of the interior, are well set out in the booklet "The Church of Saint
Michael, Framlingham' by A.J. Martin, 1978, (available in the church), ana
have not been repeated here. See also the long entry for Framlingham Church
in Pevsner's 'Suffolk', Buildings of England series, 2nd edition, 1974.