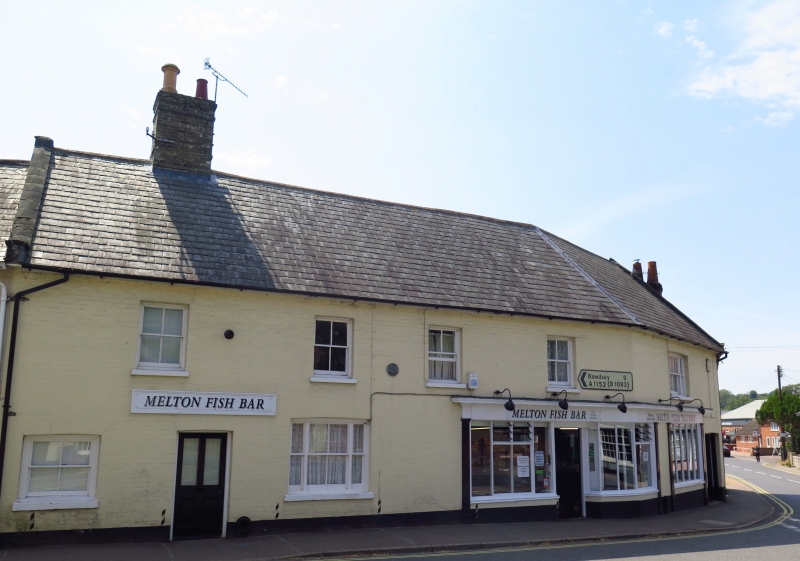 MATERIALS
Number 1 Station Road has a C15 timber frame, encased with over-painted brick to the front. Number 2 may be timber-framed and has an over painted brick frontage.

PLAN
No 1 Station Road is built on a rectangular plan with rear extensions, angled at the corner of Station Road and The Street. Number 2 has an 'L' shaped plan including an integrated building to the east.

EXTERIOR
No 1 Station Road is a two storey building. It has a gable roof with slate covering on a raised pitch to the front, and tile covering to the rear and has a rebuilt ridge stack at its east end. The façade has been encased in brick and has a number of C19, two-over-two light, sash windows on the first floor, one enlarged with shoulder lights, and a C19 ground floor shop-front. The rear elevation has a stair tower with C20 render and a flat roof, and C19 and C20 single and two storey extensions.

Number 2, also of two storeys, has a colour washed brick face, slate-covered gable roof and a red-brick end stack. A building with shallow gable roof has been integrated to the east with a C20 lean-to garage adjoining. The fenestration comprises sashes in recessed frames and sashes in flush frames with glazing bars of ten-over-ten lights at ground floor and five-over-ten at first floor, all with segmental, gauged brick arches.

INTERIOR
Number 1 Station Road comprises a C16 timber-frame with brick front. The ground floor C19 shop front has removed the front wall-framing,but in the shop itself the rear wall post, with later nailed knee braces, and the midrail remain. The floor frame, consisting of an unstopped chamfered axial bridging beam with adze marks and joists set into it, survives. A series of joists set at right angles may mark the position of an original stair. In the room to the right of the shop there is a transverse bridging beam and a partly exposed bresummer over a C20 rebuilt brick fire surround. To the rear there is a corridor along the axis of the building (at both ground and first floor levels) which has been curtailed on the ground floor by the rear extensions and the shop. A C19 door across the corridor has a C18 'HL' hinge attached with C20 screws. The cellar and rear stair tower are accessed from the corridor, the latter probably being added in the C17. The dog-leg stair has a moulded handrail and a closed string with C17 barley twist newels with bun and ball finials. Splat balusters of the same date remain from the half landing to the first floor, but are lost on the first flight and are replaced with C20 replicas on the first floor to attic flight. The first floor access to the stair is inserted through the rear of the C15 wall-frame, truncating a mullion window with diamond sockets, the lintel of which remains in situ, and cutting through a barley-twist newel. To the front of the stairs is a substantial chimney stack constructed with C17 bricks.
On the first floor the wall framing survives along most of the frontage and is exposed in many of the rooms which lead from the corridor located to the rear of the building. Two of the rooms have six panel doors with applied fillets, which may be early C17, but are hung in C19 door frames. The room to the east of the stairs has intact close-studded wall framing, a substantial wall plate (interrupted by C19 inserted windows) and cross bracing, with wattle and daub infill panels in situ. The room at the far, west end of the building has in-situ wall posts and a tie beam, but the wall plates to the front and rear are obscured or absent. Jowelled and moulded storey posts support tie beams of large scantling spanning the corridor to the front wall-plate. A tank room to the rear of the corridor has wide floor boards and an in-situ tie beam over. The roof structure is a plain crown-post, braced two ways to the collar purlin. The front pitch has been raised with new rafters, and side purlins have been added, but the original rafters are retained. Wide floor planking suggests that the floor frame may survive beneath but it is largely obscured.

A carved wall-plate and pargetting are said to remain in the west gable-end but these were not observed.

HISTORY
From the C8, Melton grew in importance as a result of its association with the dean and chapter of Ely who owned the borough throughout the medieval period. Comparison between the first edition Ordnance Survey map of 1881 and that of the present day indicates that a separate building to the east has now been integrated into number 2 Station Road and that there have been C19 and C20 extensions to the rear of number 1 Station Road. The latter retains a C15 timber-frame, remodelled in the C17, with a C19 inserted shop front to part of it. It was almost certainly sub-divided into smaller dwellings in the past, but has been integrated for a considerable period of time. In the later C19 it served as the village post office, and may have incorporated a dwelling for the master or mistress, but for the last 50 years it has been in use as a fish and chip shop and restaurant.

REASONS FOR DESIGNATION DECISION
Numbers 1 and 2 Station Road are listed in Grade II for the following principal reasons:
* They have external architectural quality in a prominent position in Melton's historic core.
* Number 1 Station Road retains a significant proportion of a C15 timber framed building and fixtures and fittings of C17 date.
* They have group value with the listed buildings in the immediate vicinity.

No. 64 The Street is removed from the list for the following principal reasons.
* The building does not match the listing description created in 1985 and was evidently listed in error.
* When judged against the listing criteria for buildings of this type and date, it falls short of the requisite architectural quality to remain on the statutory List.

Note: Numbers 64 The Street and 1 and 2 Station Road were originally all part of one list entry, but Number 64 The Street falls short of the requisite architectural quality to remain on the statutory list, and as such has been removed from the list.