A Grade I Listed Building in Blythburgh, Suffolk 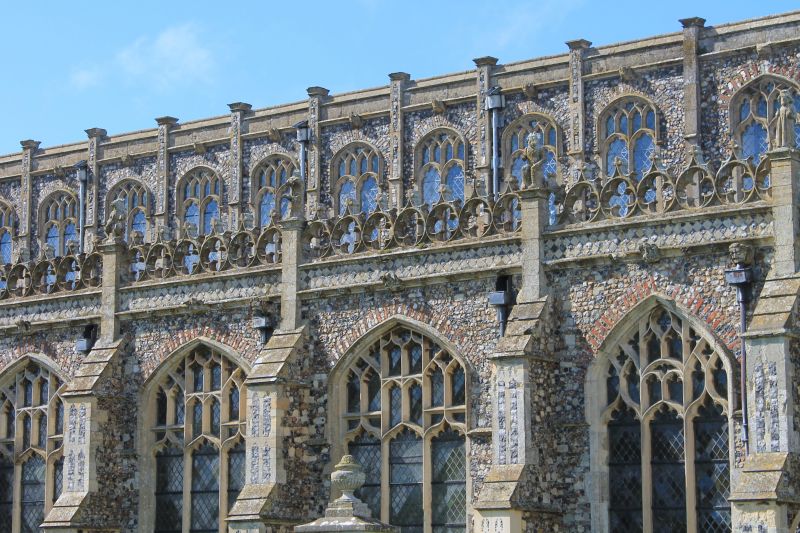 (Formerly listed as Church of the Holy Trinity)

Tower: Four
stages, with 3-stage diagonal buttresses, string courses at each stage level;
crenellated parapet with some flushwork; single-light bell chamber openings
without tracery; at base of third stage (except east face) is a cinquefoil-headed
lancet window; C15 3-light west window, the tracery renewed. Clerestorey with
eighteen identical 2-light windows to north and south. Chancel extends one bay east
of the aisles, these windows being bricked up; east end of chancel with 5-light
window, renewed tracery; below is a flushwork frieze of twelve Lombardic letters,
with further flushwork to either side of window; at apex of gable is a
mutilated carved Trinity. North aisle of eight bays, south aisle of seven bays with
the porch at the west end; the eastern two bays of the aisles have windows to a
slightly different design; both aisles have flushwork decoration to the
buttresses. South aisle and porch with fine parapet of pierced quatrefoils
with ogee cappings, below which is a frieze of lozenge flushwork and a carved
string course; the buttresses have pinnacles with grotesque finials. Each
aisle has Priest's doorway under a flying buttress, the one to the south with a
mutilated stoup. Porch with Priest's room above; knapped flint facade with
empty niche over doorway; good external stoup with carved shaft and bowl;
tierceron vaulted roof renewed in 1930's. Both north and south doorways have
C15 traceried doors.