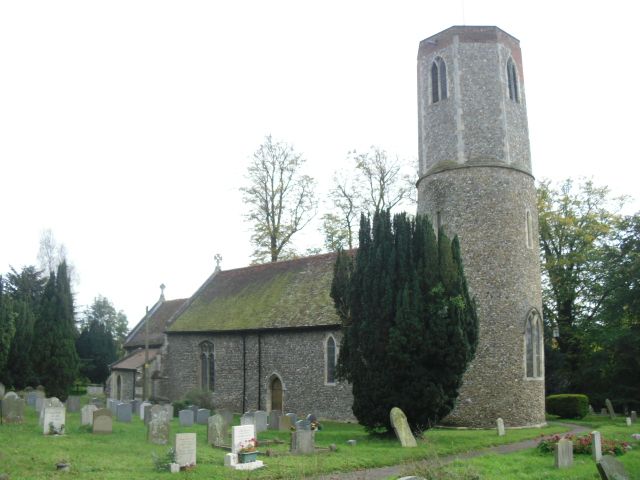 HASKETON CHURCH ROAD
TM 25 SE
(East side)
3/107
16/3/66 Church of St Andrew
GV II*
Church. Cll-C12, Early C14 and C19. Rubble flint with ashlar dressings
and a plain tile roof. Western tower, nave, chancel, north-eastern vestry
and south-western porch. Tower: Circular lower body of Cll-C12 with
octagonal belfry stage of early-C14. Western facing portion: 2-light
ground floor window of early C14 Y-tracery with chamfered ashlar surround
and hood-mould. Lancet light above this with ashlar surround. The tower
then dies back via an ashlar offset to an early-C14 octagonal upper body.
This has ashlar quoins to the corners and a central belfry opening with
louvres and Y-tracery. Brick parapet above of late-C18 or early-C19 brick
with ashlar coping. The northern and southern faces are similar save that
they have no windows at ground floor level. The eastern face abuts the
nave but has a similar belfry opening. Nave: North face: mostly rebuilt in
the early C14 with ashlar quoins but showing some herringbone flint.
Lancet window at right. Doorway to right of centre with ashlar surround
having double-wave moulding and hood mould. Early-C14 plank door with
contemporary strap hinge. Perpendicular window at left of this of two
lights with quatrefoil heads and plate tracery. Buttress at left which
dies back into the wall via 3 offsets. South face: porch at left of centre
of mid-C19 date with walls of knapped flint. Side walls of rubble flint
having single lancet lights with quatrefoil heads and hood moulds. To left
of the porch is a Perpendicular window of 2 lights, the tracery mostly
replaced in the C19. To right of this is a Decorated window having C19
tracery, which may repeat the original pattern of curvilinear form. To
right of this is a late-Decorated window of 2 lights with buttress at
extreme right which dies back via 3 offsets. Chancel: lower ridge than
nave. East face: appears to have been largely rebuilt in the C19.
Diagonal buttresses which die back via 2 offsets. Ashlar kneelers and
coping. Central window of C19 date and of 3 lights with trefoil heads and
trefoils and cinquefoil to the apex. North face: at right is the
projecting vestry with a lean-to roof, rubble walling and diagonal
buttresses which die back into the corners and a doorway at left with
simple chamfered surround. Its left hand flank has a window of coupled
ogee-headed lancets. To left of the vestry is a lancet window with hollow-
chamfered ashlar surround and hood mould. South face: C19 window at
extreme left of Decorated form, 2 lights with trefoil heads and a trefoil
to the apex. To right of this is a Perpendicular window of 2 lights with
quatrefoil heads.

Interior: Porch: the church doorway has a richly-moulded arch with hollow
chamfer, wave and quirked bead mouldings. Nave: roof, originally of 4 bays
now has a wagon roof of plaster panels with moulded pine ribs. Of the
original trusses all that remain are the tie beams which have ovolo
mouldings to their lower angles and brattishing to their tops. C19 cornice
with ovolo mouldings. Font is of mid-C15 date with octagonal stem having
sunken panels of blind tracery before which stand small plinths of semi-
octagonal form (as if to carry crouching lions and buttresses that were
unexecuted or have been removed). Below the bowl are angels' heads with
interlacing wings. The bowl itself has sunken panels, those facing the
compass points having angels bearing coats of arms of the De Brewse family
(who erected it) and the same impaling Ufford, Shardelow and Stapleton.
Roses to the other panels in high relief with leaves in shallow relief
extending into the angles. The lower doorway to the rood screen is now
blocked but has a double ogee archway of ashlar. Monument of 1665 of
alabaster to William Robert Goodwyn. Rectangular tablet with aedicular
surround. Coats of arms to the surmount. Cherubs to the frieze with
pomegranites below and Cherub's head and swag of fruit to the apron.
Double chamfered chancel arch with broach stops to the bottom. The chancel
is wagon roofed with similar moulded ribs to those in the nave but with
square flower bosses to the intersections. Dentilled cornice below.
Alabaster monument of 1635 to William Farrer. Central rectangular tablet
of black marble with segmental top, the surround being of white alabaster
with auricular ornament to the sides - winged cherub's head to the surmount
and skull and crossed bones to the apron. South eastern window has
colonnettes to either side of the reveal with moulded caps and bases.