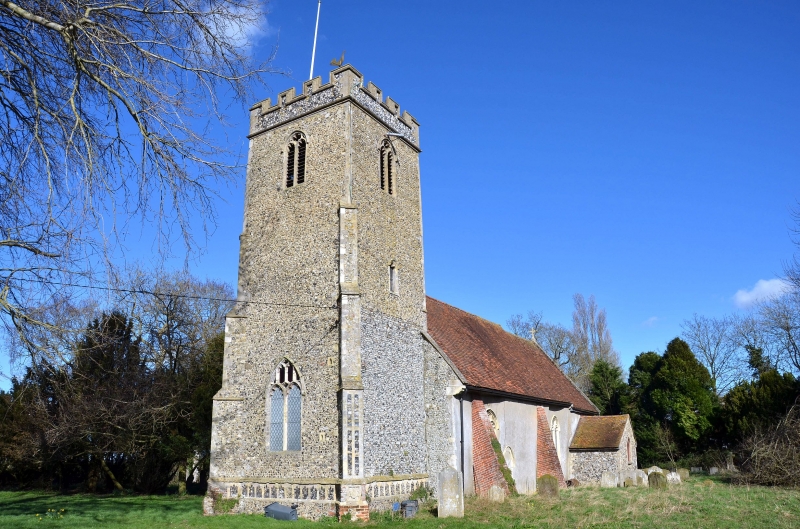 BREDFIELD THE STREET
TM 25 SE
(West side)
3/43 Church of St Andrew
16/3/66
GV II*
Church. C14, C15, C16 and c.1839 and c.1875 by R M Phipson. Knapped flint
and rubble flint with ashlar dressings, and brick with plain tile and slate
roofs. Western tower, nave, chancel, north-western porch, south-eastern
vestry. Tower: west face: rubble and knapped flint. Slightly projecting
plinth inset with panels of flushwork being circles with quatrefoils to
their lower bodies and paired mouchettes above. Other patterns, including
crowned Ms are incomplete, appearing only in inscribed outline in the
ashlar. Moulded offset above. Diagonal buttresses to the corner, the
outer faces of which have panels of flushwork tracery with trefoil heads in
a pattern of 2 x 2 panels to each face repeated after each offset. Central
ground floor doorway with moulded surround of hollow chamfers and wave
moulds with hood mould. Above this a 2-light Perpendicular window with
cinquefoil heads. The buttresses die back into the corners below the level
of the belfry stage and there is a string course at this level on which
rests the belfry window of 2 Perpendicular lights with trefoil heads.
Ashlar quoins to the corners. The parapet projects slightly and is of
brick with stepped gables and panels of flushwork tracery and with
polygonal pinnacles to the corners which have now been reduced in height
but probably formerly bore mace finials. The northern and southern faces
have similar belfry openings but blank walling below, the south face having
a lancet with chamfered ashlar surround. The plinth has here arcades of
flushwork in the form of cusped lancets. The east face abuts the nave to
its lower body but has a similar belfry opening. Nave: Slate roof. North
front: projecting porch, slightly to right of centre and mostly refaced in
the C19 with a plain tiled roof. Gabled south front with diagonal
buttresses. Central doorway with ashlar chamfered surround. Lancet
windows to the side walls with square hood moulds. To the right of this is
a C19 Perpendicular window of 2 lights with cinquefoil heads. Similar 3-
light window to left of this. Buttresses to either side of the porch and
to far left. South face: 3 buttresses at right, left and right of centre.
Two C19 Perpendicular windows, that at left having 2 lights, that at right
3 lights and similar in pattern to those on the north faces. Doorway to
left of centre with chamfered ashlar surround, now blocked. Chancel: lower
ridge and plain tile roof. North face: 2-light early-Perpendicular window
at right with ogee cinquefoil heads and mouchettes to the apex. Priest's
door at left of this with a 4-centred head and chamfered ashlar surround
with broach stops. To the extreme left is a buttress. South front: mostly
obscured by C19 gabled projecting vestry which has a slate roof, ashlar
quoins to the corners and kneelers and coping to the gable. Central 2-
light Perpendicular window with cinquefoil heads. The right hand side wall
has a door with ashlar surround.

Interior: Porch: 2-bay hammer-beam roof with rounded ends to the wall posts
and hammer beams. Arched braces join these two having foliate motifs to
their spandrels. Further arched braces rise in the central truss from the
hammer beams and posts to connect with the collar. The richly moulded
hammer posts and collar adjacent the nave wall may be planted timbers.
Deep moulded cornice to either side and moulded purlins. Nave: roof of 6
bays and 1/4 bay at west to accommodate the diagonal buttresses the flanks of
which project into the nave. Moulded wall posts, all obliquely cut at
their lower ends, and apparently once bearing attached bosses. Four-
centred arched braces which run longitudually and are halved against the
wall surface, have floral motifs to their spandrels. Further 4-centred
arch braces with richly moulded edges rise from the wall posts to the
hammer beams which have richly moulded undersides and brattishing and open
fleurons to their tops. The ends of the hammer beams are also obliquely
cut and also appear to have once carried bosses. Short, slightly recessed
hammer posts, large 4-centred arch braces connecting hammer posts and beams
to the collar beams which have moulded under-edges and brattished cresting
and support square king posts from which spring 4-centred arch braces which
run along the chamfered ridge beam. Richly moulded cornice with 6 layers
of decoration, a combination of brattishing, roll mouldings, filigree
tracery with plank backing and fleurons. Richly moulded purlins. The two
easternmost bays are painted to form a Canopy of Honour with chevron
patters to the common rafters and sacred monograms and flower decoration to
the arched braces. The ridge and the underside of the topmost arched
braces are also painted with chevrons. The cornice has gilding and
colouring to its mouldings. A rood loft staircase rises from the left hand
reveal of the south eastern window, the inner doorway having a cusped head.
Jacobean pulpit on C19 base with arched and incised panels and a C19
reading desk. To the southern wall is a piscina with chamfered surround
and broach end stops, the bowl now filled. Brass of 1611 to Leonard and
Mary Farrington with weepers below, their 6 sons and 2 daughters, now
mounted on the south wall. Chancel: C19 roof with common rafters, arch
braces, collars, and ashlar posts. Wall monument of 1675 to Robert
Marryott of black and white marble with central recessed rectangular black
tablet with white aedicular surround. Roman Ionic pillars with black
shafts and white capitals and bases. Below these a ledge supported on
console brackets between which is an apron with swag and coat of arms.
Entablature to top supporting scrolled pediment through which rises a
cartouche with a coat of arms. Credence table formed of the tester of the
pulpit which has panels of incised decoration with acorn drops to the
corners.
SOURCES: Nikolaus Pevsner, The Buildings of England: Suffolk, 1975
H Munro Cautley, Suffolk Churches, 1982