A Grade I Listed Building in Butley, Suffolk 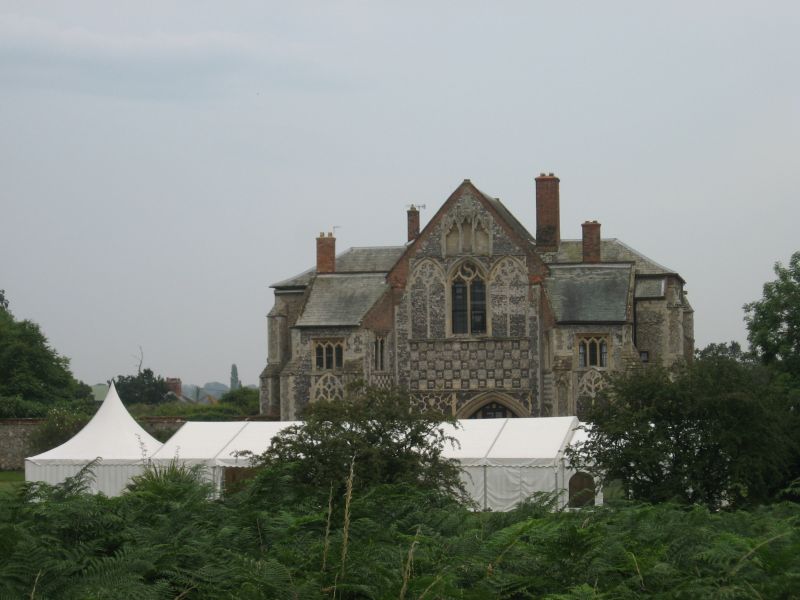 The main gabled carriageway runs north-south. The north front is flanked by two stages of the original buttressed towers which project forward. The south gabled front projects beyond the rear rooms of the towers. The north front has two sham windows in Decorated tracery either side of a similar glazed window. The sham windows are filled with flushwork. Below the windows is an armorial panel of thirty-five shields in five rows. The north towers each have a sham Decorated window above which is a straight headed window with three ogee headed lights. The original carriageway entrance has a depressed moulded pointed arch on stone ashlar jambs. To the left is a pedestrian entrance with pointed arch: both entrances are filled with timber studs, mullion windows and red herringbone brick infill. The south front has similar sham windows to those of the north and also a carriageway doorway of similar style with modern entrance door. The left and right hand rooms behind the towers have C18 sash windows in flush frames with glazing bars and gauged brick arches and red brick jambs.

Inside the main carriageway the ceiling is vaulted with stone ribs and stone infill; the smaller rooms either side are also vaulted with brick infill in domed form. There is also a fine Georgian staircase and some Elizabethan panelling.

The Abbey was founded in 1171 by Ranulph de Glanville, Justiciar of Henry II and the gatehouse is considered "one of the most ambitious and interesting buildings of the C14 in Suffolk". N. Pevsner (see The Buildings of England, Suffolk volume). The whole complex of the Abbey and Priory is fully documented and described in Journal of the Royal Archaeological Institute of Great Britain and Ireland, 1934, by Messrs. J.L.N. Meyers and J.B. Ward Perkins.