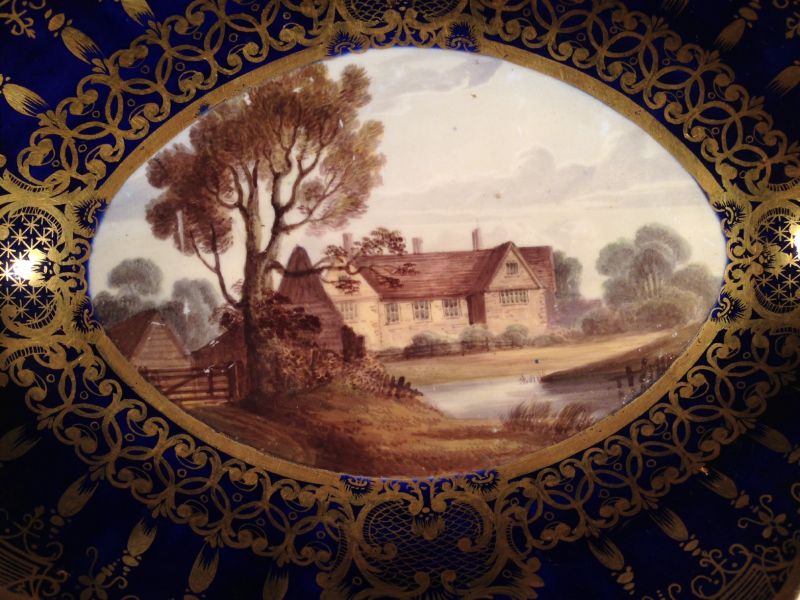 
Manor house. Late C16 and early C17 refaced in mid C19. 2 storeys and attics:
half-H form. Timber-framed: faced on front and along south side with small
ornamental red tiles with floral motifs: old plaster with traces of pargetting
on north side: Late C17 and late C19 brick extensions at rear. Plaintiled
roofs, with alternating bands of fishscale tiles: fluted barge-boards and
hollow pierced pendants to gable ends of north and south cross-wings, both of
which are jettied. As well as the applied tiles, the mid C19 embellishments of
the exterior include a heavy wooden cornice across the front of the hall range
and along the inner sides of the wings: strips of carved boarding applied to
the bressummers and corners of the wings: 3 stacks of chimneys with ornamental
shafts in different designs, and a central open-fronted porch with a steeply-
pitched roof, banded like the main roofs, the side walls covered inside with
blank arches in Early English style. 5-light ovolo-moulded mullion-and
transome windows, slightly projecting on the upper storey. On the north side
wall: one blocked original window, 2 small-paned sashes and one small 2-light
casement with C18 square leaded panes. In the west wall of the late C17 brick
extension, cross windows with rounded arches to surrounds. The interior layout
was remodelled in the early C17, when panelling and ornamental plaster ceilings
were added. The large entrance hall has an open fireplace with Jacobean
overmantel, square panelling, partly restored, C19 boarded ceiling. The 2
principal rooms in the south wing have square panelling and heavily ornamented
plaster ceilings, and the upper room above the hall has an unusual moulded
stone fireplace surround, Jacobean overmantel with caryatids, and a decorated
plaster ceiling similar in style to the other 2, but with a frieze also,
ornamented with figures of animals and wild men. The late C17 rear wing
contains a fine dog-leg stair with heavy turned balusters, and panelled sides.
Egg-and-dart and dentils to plaster cornice of stair wing.