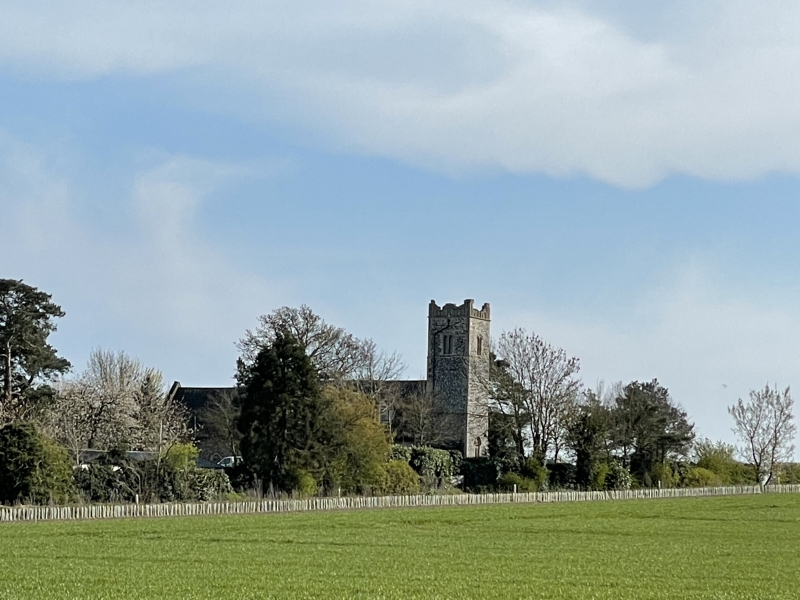 Former parish church, disused since before 1900, and now a roofless shell. C13
and later. Flint rubble with freestone dressings. A small, narrow west tower
in 4 stages: remains of an embattled parapet with panels of flint flushwork.
On the south face are 2 panels with the crowned monogram SM, one on each side
of a central panel with a circle ornamented with mouchettes. Below the parapet
a gargoyle head on the south side. The top stage has 2-light cusped early C14
windows to each face. The west window of the first stage was apparently the
same, but the tracery is now fragmentary. The side walls of the nave and
chancel stand to the tops of the windows, but all are gaping holes except for
the 2 openings at the west end of the nave, which have the remains of lancets
with trefoil heads and very deep inner splays. The east wall stands to full
height, with the tracery of a 3-light window with trefoil-headed lancets. The
church was formerly thatched. In 1933, when it was already much decayed, its
fittings were removed: the early C15 traceried font to Lakenham church, the
Stuart pulpit altar rails, holy table, font cover, and other fittings, to
Riddlesworth. For a description of the church in 1933, see Munro Cautley
'Suffolk Churches and their Treasures' p.285.