A Grade I Listed Building in West Stow, Suffolk 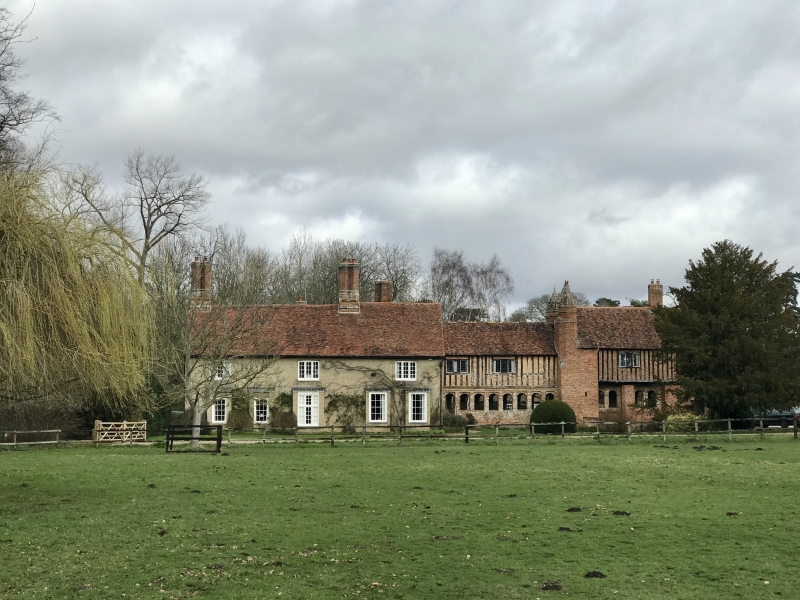 House and gatehouse. Early C16 and later. Two storeys. Part red brick, part timber-framed, part white brick, all with plaintiled roofs. Gatehouse of circa 1520, built by Sir John Crofts, Master of the Horse to the sister of Henry VIII, Mary Tudor, who was briefly Queen of France, and subsequently the wife of Charles Brandon, Duke of Suffolk. Her arms, quartered with those of Charles Brandon, have been placed over the gateway. Red brick end walls with three storey polygonal turrets at the corners. The turrets have blank panels with double trefoil heads, and cruciform loopholes: ogee crocketed pinnacles with figural finials. The centre between the two turrets has a stepped gable. The simple arched doorway has a panel of diaper-pattern moulded brick above with traces of stucco, and between it and a C20 replacement window to the top storey is a panel with Mary Tudor's arms set into it. The upper side walls of the gatehouse are in timber-framing with brick nogging, much restored, jettied out over an open brick arcade. The upper storey is divided into two rooms, with a chimney-stack between them.

During C19 restoration some Elizabethan wall-paintings were discovered on the eastern side of the stack. These depict in naive form, a hunting scene and the four Ages of Man: a young man out hunting, inscribed 'This do I all the day'; a man embracing a woman - 'Thus do I while I may'; a middle-aged man looking on - 'Thus did I when I might'; and a bent old man, leaning on his stick, who says 'Good Lord, will this world last ever'.

A depression in the ground indicates that the gatehouse originally spanned a moat, which is said to have surrounded the whole site. The gatehouse is linked to the house by a late C16 colonnade of red brick, with a timber-framed upper storey containing a single long room, possibly intended as a long gallery. The colonnade has nine semi-circular-headed arches with keystones, and demi-columns inside, all with remains of original render. Two similar arches were introduced into each side of the ground storey of the gatehouse. Nothing remains of the medieval house reputed to have been on the site, and all that survives of a building contemporary with the gatehouse are three bays including, and to the north of, the main entrance.

The jettied upper storey is timber-framed with brick nogging, the jetty underbuilt in early C19 white brick. Remains of moulded mullions to the upper storey: bressummer with running leaf carving. Plaintiles. alternating with bands of fishscale tiling. At the end of the range, a large chimney-stack with a recessed panel with trefoiled decoration on the high base, similar to that on the gatehouse, and the bases of three barrel shafts, repaired in plain rectangular form. This stack was internal, and the frame continued for at least two more bays to the north.

Inside, a two and a half bay hall is partitioned-off from a C19 corridor: main cross-beams with a complex roll-moulding, and joists with ogee-mould and leaf stops. Beside the chimney-stack, two wide carved spandrels indicate an original archway or window. Behind the stack, in a later backhouse, a main beam with carved cresting and housings for joists and a trimmer. At right-angles to this range is another, aligned east-west: encased in white brick, dentil cornice, small-paned sash windows in square bays with tiled lean-to roofs to ground storey, tripartite sashes in deep reveals to upper storey. The interior is timber-framed, with plain early C17 ceilings, ovolo-moulded mullions, and much reused timber.