A Grade I Listed Building in Sotterley, Suffolk 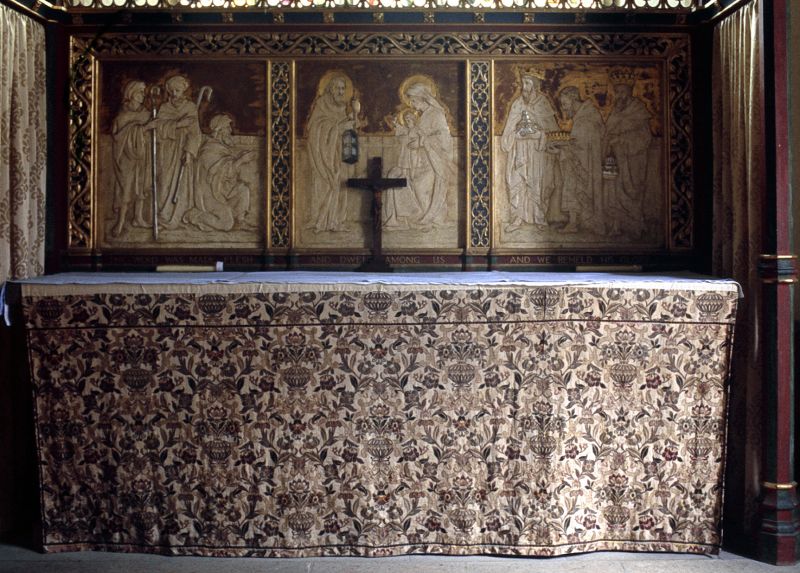 Parish church. Medieval, restored 1900. Nave, chancel, west tower, south
porch, north vestry and organ chamber. Flint rubble with remains of
plasterwork to the north sides of the nave and chancel; scone dressings;
plaintiled roofs. Early C14 unbuttressed tower in 2 stages of approximately
equal height, the upper stage being inset and tapering; crenellated parapet.
2-light west window with cusped Y tracery; 2-light bell chamber openings with
Y tracery. North nave with C12 coursed rubble; various C14 and C15 windows to
nave, mostly restored; to the north there is a good unrestored 2-light C14
window with carved label stops. C15 porch; the nave door is also C15 and has
panels with cusped heads and tracery above. 2-bay chancel, probably C14: 2-
light windows with Y tracery; 5-light east window, probably of 1900.
Interior. Late C19 scissor-braced rafter roof to nave; C19 boarded ceiling to
chancel. The north east nave window is set within a large shafted recess, the
eastern part of which is missing. In the south west nave is the niche of a
banner stave locker. Trefoil-headed piscina in south sanctuary, the arch
resting on corbels. C15 octagonal font, the bowl carved with the Signs of the
Evangelists and angels with shields. C15 rood screen: the dado has 12 panels
painted with the apostles (much restored); the upper part of the screen has
been altered and the original vaulting removed. The choir stalls incorporate
C15 traceried woodwork and poppyhead ends. In the north sanctuary is a very
fine marble wall monument to Sir Thomas Playters (1638) by Edward Marshall,
master mason to Charles II. There are 3 kneeling figures, Sir Thomas frontal
and a little above him 2 wives who are in profile facing him; above are
pediments with carcouches and below is a frieze showing their 22 children
including a baby; the monument is framed by black marble columns. In the
north chancel is the comb chest of William Playters (1512) and his wife: there
is a brass inscription around 3 sides of the slab and on the front are 3
foiled panels with brass shields (one missing) and 2 brass effigies (one
missing). Several good effigy brasses in chancel to members of the Playter
family, notably Thomas Playter (1479) and wife. 4 hatchments in nave. Some
fragments of C15 stained glass, notably the 2 intact figures in the west
window.