A Grade I Listed Building in South Cove, Suffolk 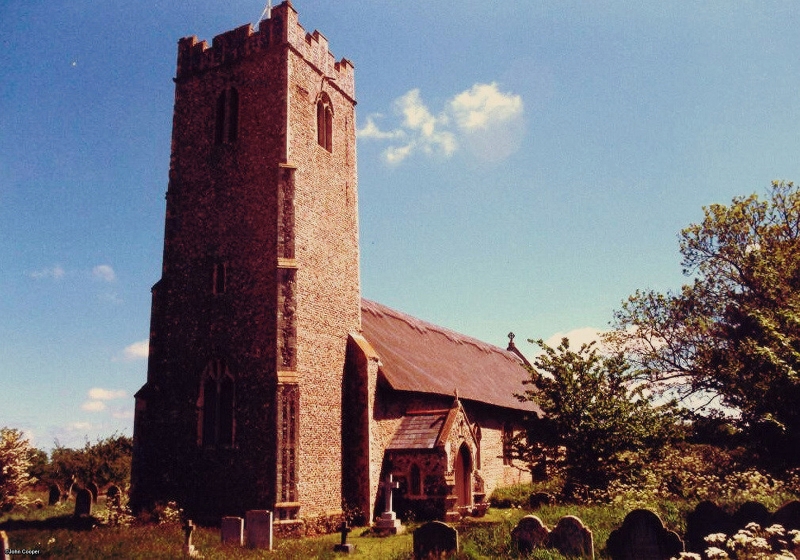 Parish church. Medieval; chancel restored 1877. Nave, chancel, west tower,
south porch. Flint rubble, the chancel plastered; stone dressings; thatched
roof. C15 square tower: 3-stage diagonal buttresses to west face and
crenellated parapet, both with flushwork decoration; 2-light west window; 2-
light bell chamber openings, that to the west rebuilt in brick. C12 nave with
original north and south doorways. The north doorway has a good C15 door with
crocketed ogee arches to the panels and tracery above. The south doorway has
a chevron-moulded arch and one order of colonettes to the jambs. 2-light
C15 windows to north; 3 2-light windows to south, of C14-C15. Porch rebuilt
1880. Chancel probably early C14: 2-light windows with Y tracery, one to
north, 2 to south; 3-light east window; simple priest's doorway to south.
Interior. No chancel arch. Fine C15 arch-braced nave roof of 7 bays, with
east-west bracing between the wall posts and along the ridge. C13 angle
piscina in south chancel, with triple sedilia adjacent. In the north west
corner of the nave is the tall niche of a banner stave locker. Defaced C15
octagonal font bowl. Early C17 carved pulpit, reduced from a 3-decker. The
nave has a good set of 24 C15 benches, the ends carved with tracery and
poppyheads. The south section of the dado of the C15 rood screen remains in
position: 6 cusped blank panels in 2 bays with remains of original colouring
and gesso work. C15 painting of St. Michael on boarded door to rood loft
stairs: if original this door is a rare survival. Good original door to tower
stairs.