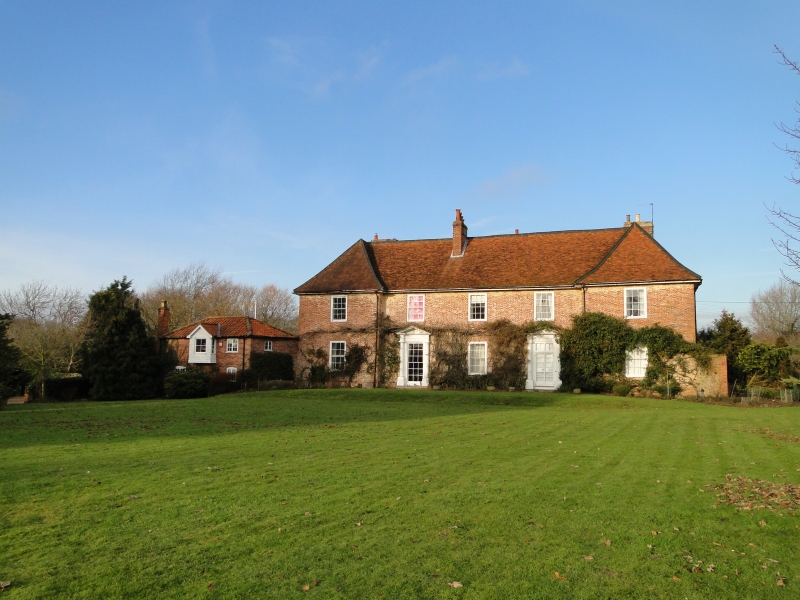 GV
II*
Former manor house. Mid C17 with mid-late C18 facade; later pantiled range set forward to left, altered mid C20 and now part of the main house. Red brick, originally colourwashed; plaintiled roof. 2 storeys. 5-bay facade,1:3:1, with hipped wings set slightly forward; sash windows with glazing bars in flush frames under flat brick arches. The right hand bay of the centre block has a doorway with C20 glazed double doors and a Tuscan doorcase with half-engaged columns and pedimented entablature; balancing this on the left hand side is a tall sash window with an identical surround. Small internal stack. The returns of the wings are divided into 3 bays by brick pilasters, with windows in the centre bay; the left hand return is now altered. To the rear there are flanking Dutch gables, both with blocked circular windows at attic level, and a central straight gable with blocked square openings; the Dutch gables have integral stacks, the centre gable a later external stack. Some original plaster-moulded beamed ceilings on first floor; one first floor room also has painted panelling of late C18 or early C19. A little timber framing has been exposed in one internal wall at the rear, perhaps part of an earlier core.