A Grade I Listed Building in Harleston, Suffolk 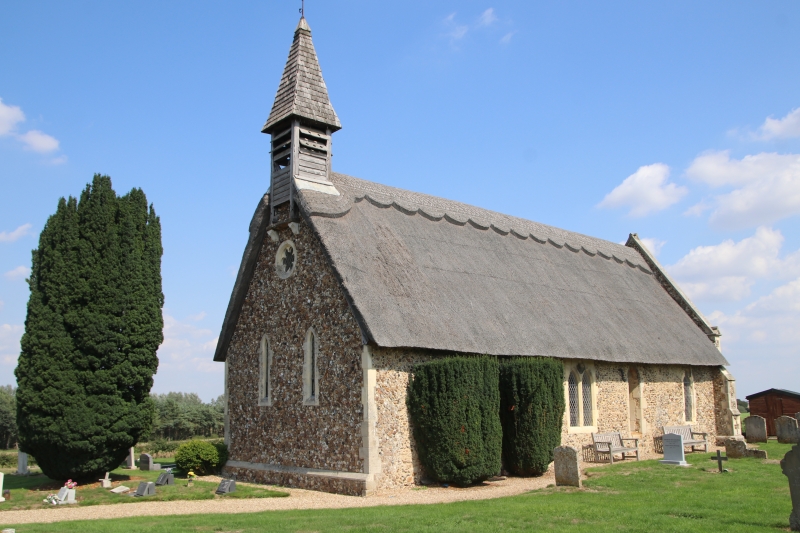 Parish church, medieval with restoration of 1860. Nave and chancel. Flint
rubble with freestone quoins. Thatched roof; a parapet gable at the east end
and a timber bellcote with shingled pyramid roof of 1860 at west end. A small
Norman church with evidence for an apsidal east end before the chancel was
extended in C13. A plain C11 or C12 south doorway with chamfered imposts; the
north doorway was similar but has been blocked. A pointed lancet in north
wall of late C12/early C13. A C13 window in the chancel has a double splay.
A trefoil-headed chancel window of c.1300 has a pair of squinch arches over
the sedilia, and linked with it is a trefoil-headed piscina. Other windows in
east and south walls are C19, and the west wall was probably rebuilt in 1860.
The canted and plastered continuous roof over nave and chancel appears
medieval but may be a C19 renewal; there are two encased medieval tiebeams.
An unusually early rood screen of c.1330-50: turned baluster shafts, ogee-
headed lights with dagger tracery. Limestone font, the stem perhaps of
c.1300: octagonal with broach stops alternating with stops having sunk
cusping. (The bowl was renewed in C19).