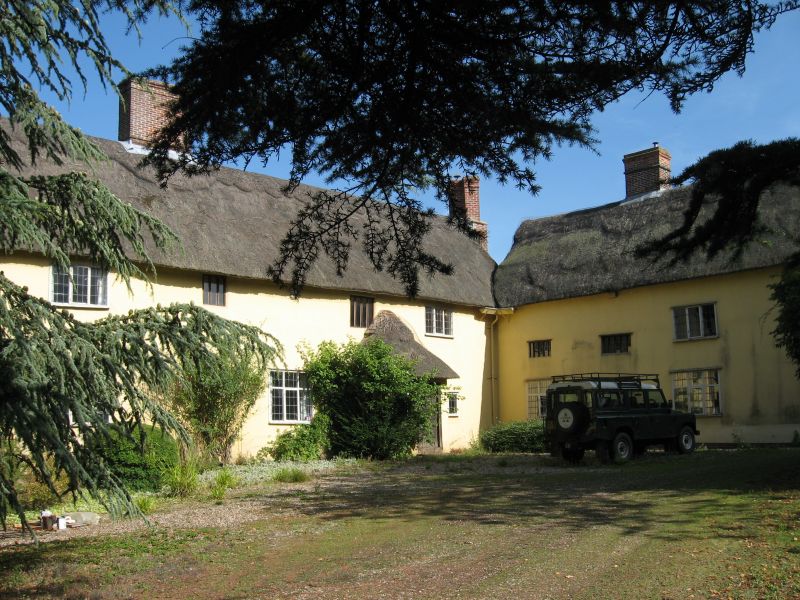 Former farmhouse. Early-mid C16 main range of 3-cell cross-entry form; set
corner-to-corner to the south west is a shorter service range, probably C16
but raised and re-roofed at a later date. Timber framed and plastered, with
remains of old panelled plasterwork to main range. Thatched roofs. 2 storeys
with attic to main range. Scattered fenestration: mostly C18 square-leaded
casements and original windows with moulded mullions, the latter opened out
during C20 restorations. Main range has C20 porch with hipped thatched roof
and boarded door. Internal stack with C16-C17 plain oblong shaft; against the
south gable end a C17 external stack with 2 square shafts set diamondwise.
Service range has internal stack. Very fine interior with most of frame
exposed. The hall has a moulded beam and joist ceiling and moulded cornice,
the bridging beam and end cornices also enriched with brattishing. Joists
have leaf-carved stops. Heads of storey posts carved in a similar manner to
nearby Brundish House (Item 4/11). Fireplace lintol is carved with initial
'W' in a shield (probably for Wyard family), with a facing pair of winged
beasts and wheatsheaf emblems. Arched doorways with carved spandrels and some
good early doors. Evidence for screen at lower end of hall, with a moulded
ceiling in the cross-passage. The present partition at the lower end of the
hall must be a slightly later addition. Parlour and parlour chamber have
moulded beam and joist ceilings and moulded cornices. Fine close studding in
parlour. Stucco fireplace with sunk spandrels in hall chamber. Roof has a
single row of clasped purlins and arched windbraces. Service range has some
heavy plain ground floor joists; at the east end is a blocked secondary window
with chamfered mullions replacing the original diamond-mullioned window. Part
of a carved fireplace lintol, probably re-used from the main range. Sandon,
Suffolk Houses, 1977, pp.129 & 253-4. Remains of medieval moated system.