A Grade I Listed Building in Wingfield, Suffolk 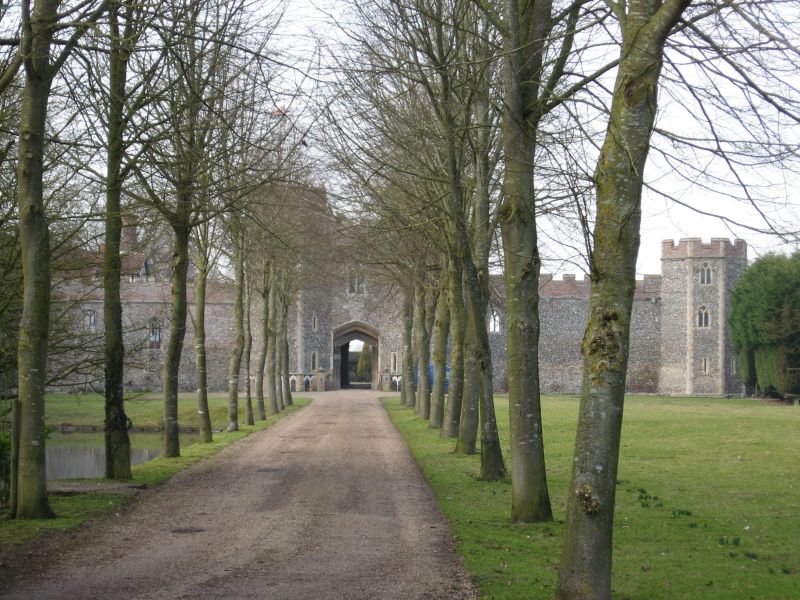 Remains of fortified manor house. Late C14, for Michael de la Pole, who was
granted licence to crenellate in 1384. An irregular rectangle on plan,
surrounded by a moat. Only the south curtain wall is intact, with a fine
gatehouse, not quite central, and polygonal corner bastions. Flint rubble
with stone dressings. Red brick embattlements, mostly rebuilt. Below the
parapet a string course with gargoyles. Lancet and loop windows to ground
floor, 2-light Decorated-style windows above. Gatehouse has 3-storey
polygonal corner towers with flushwork panelling at the base. Outer entrance
has moulded segmental pointed arch, dying into the imposts. Moulded inner
arch with original gates and wicket gate. In the jambs are square panels with
the Wingfield and de la Pole arms and a portcullis groove. To courtyard a 4-
centred arch. Inside the gateway 4 doorways with 2-centred arches. Evidence
for vaulted roof. First-floor guardroom has original fireplace with stone
buttresses terminating in corbels carved as human heads. 2-storey curtain
walls; on the inner side there are several fireplaces and a piscina where
living rooms and the chapel once stood. Foundations of the missing curtain
walls and bastions can be traced. The present house is built into the remains
of the west curtain wall, probably on the site of the castle great hall, part
of which it may incorporate. Mid C16, with at least 2 phases of C17
alteration. An impressive range some 40m long. Part rubblework, colourwashed
or plastered, part timber framed to the upper floor, with good C16 exposed
close studding to the east. Roof plaintiled to east, glazed black pantiled to
west. 2 storeys and attic. Various mullioned and mullion and transom
windows: some original, others of later date and some C20 copies of C16 work.
Fine diamond-leaded glazing with many stained glass panels, much of it old but
all inserted C20 from elsewhere. 2-storey rubblework entrance porch: 4-
centred arch, the hoodmould supported on stops carved with falcons, the crest
of the Jernyngham family to whom the castle was granted in 1544. Above the
entrance an oblong niche surrounded by guilloche work. Original doorframe and
door. To north of porch a 3-storey stair tower: square, with splayed angles
to ground and first floor. To the west a massive external stack with 4
octagonal shafts, 2 having moulded brick embellishment; star caps. 3 other
external stacks, one with rebuilt octagonal shafts. Later axial stacks.
Interior has a number of good 4-centre arched brick fireplaces. Main ground
floor room has ovolo-moulded ceiling beams of c.1600. In the kitchen a
blocked late C14 opening to the moat with a moulded arch. Fine C16 plain oak
newel stair in 2 flights. Large first floor room with plain barrel ceiling.
Much C17 work, especially partitioning. Mid C16 roof with clasped purlins and
arched wind braces. The detached buildings within the line of the curtain
walls are not included in the listing.