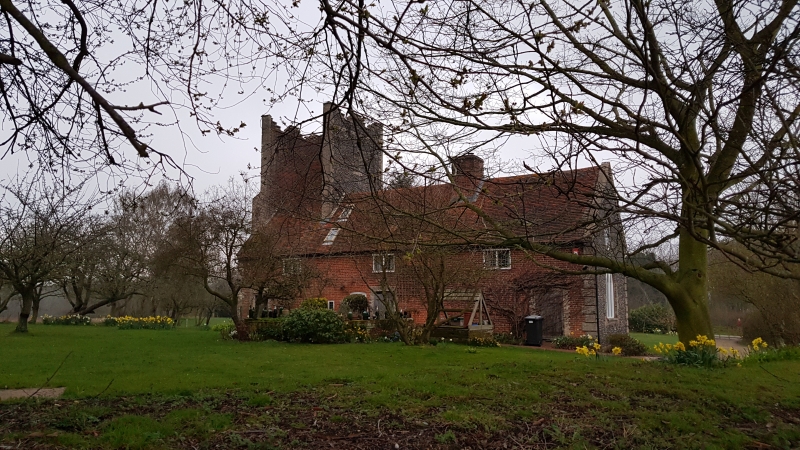 Folly church, masking a dwelling (originally 3 cottages). Converted into its
present folly form from an older building circa 1790, by Thomas White of
Tattingstone Place, as cut on a chimney brick with initials T.W. originally
timber framed, the north face, east gabled return and west tower resemble the
nave and tower of a church and are flint faced with gault brick rusticated quoins
and dressings, red plain tiled roof continues through to rear and south of the 3
sided mock tower. Rear chimney stack. Dentilled eaves cornice. Plinth. North
face:- 2 two-light windows, 2-centred heads, rusticated 2-centred arches with
keystones over. There is a similar window of 3 lights with tracery over to the
east face with a circular, square-leaded window above. The 3 faces of the mock
tower have crow stepped crenellations with a gault band under. Stepped
buttresses to angles. Blocked 2-centre arched "Belfry" windows to all faces,
western face has similar windows to 1st and 2nd stages, that to first stage with
leaded lights. Western ground floor window of 3 lights similar to eastern
window. Rear wall, brick, gault dentilled eaves and quoins, 3 first floor
2-light leaded casements, 3 nailed vertically boarded doors and 2 windows to
ground floor. The north, "Church" face can be seen from Tattingstone Place and
forms part of the landscaped park. The tradition is that Squire White said:-
"People often wondered at nothing, so he would give them something to wonder
about." P G M Dickinson. The Little Guides, Suffolk 1957. White's
Suffolk - 1844.