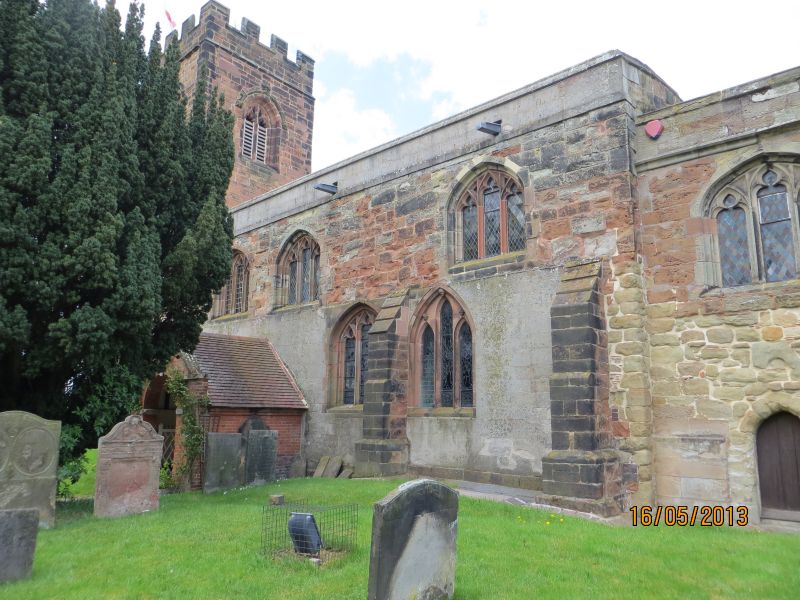 MIDDLETON CHURCH LANE
SP19NE (North side)
2/77 Church of St. John the Baptist
GV II*
Church. Mid-C12 with major additions of circa 1300 and of the late C15; further
additions of the C18/early C19; restored 1876. C12 coursed sandstone rubble and
late C15 ashlar; plain tile roof over the north aisle; the other roofs are
hidden behind the parapet. West tower with diagonal buttresses, 4-bay nave with
north aisle incorporating a western vestry, 2-bay chancel with diagonal
buttresses. West tower: late C15. 4 stages: plinth with moulded coping, moulded
third stage and parapet strings and a crenellated parapet with continuous coping
around the merlons and embrasures. West door with 4-centred arch, 2
hollow-moulded orders, and a heavily crocketed hood mould. Pointed 3-light
window above with cinquefoil cusping and panel tracery. Trefoil-headed loops to
the third stage and pointed 2-light belfry openings with cinquefoil cusping and
panel tracery. All windows have heavily crocketed hood moulds including the
staircase loops at the south-west corner. On the south side of the tower is a
niche with crocketed nodding ogee arch flanked by finials. Nave and north aisle:
C12 south door with half-roll and chevron moulded arch within a C18 brick
(Flemish bond) porch with stone coped gable. The entrance to the porch has a
semi-circular arch springing from imposts, with a raised keystone. To the left
is a C19 tall 3-light mullioned window and to the right 3 C15 clerestory windows
each with 3 trefoil-headed lights and hollow-moulded surrounds. The north aisle
is of circa 1300. It has a nail-studded door with semi-circular head, and 2 C19
rectangular windows. Early C19 single-bay vestry extension to the west in a
Gothick style: large pointed north window of 4 lights with intersecting tracery
incorporating an ogee arch, and ogee moulded surround. 3-light west window with
intersecting tracery and pointed west door with raised surround. Chancel:
blocked C12 loop with semi-circular head, roughly in the centre of the north
side. The south side retains the head of a similar loop towards the west end
above the existing priest's door. This latter is a C14 or C15 insertion and has
a pointed head. Like the nave the chancel was given a clerestory in the late
C15. The windows have 3 trefoil-headed lights beneath a 4-centred arch and a
hollow-moulded surround. C15 east window of 4 trefoil-headed lights beneath a
4-centred arch. Both nave and chancel have a continuous parapet with moulded
string and coping. Interior: north arcade of circa 1300 with pointed arches of 2
chamfered orders on octagonal columns with moulded capitals. Tall C15 pointed
tower arch with outer sunk-chamfered order and inner wide ogee-moulded order,
both interrupted by moulded imposts. Late C15 chancel arch of 2 orders with
similar imposts to those of the tower arch. Squint between north aisle and
chancel (restored). Both nave and chancel have plastered ceilings with exposed
tie beams. Fittings: C18 baluster font. C19 octagonal font with panelled basin
on a squat pedestal, and a conical Gothick style font cover. C19 pine benches
with traceried ends. Late C17 pulpit, square with canted corners.a The sides
have fielded panels; the narrow ones contain twisted baluster-shafts and the
principal sides cherubs' heads. C15 chancel screen of 2:1:2 bays. The solid
lower panels have trefoiled arches with rendant cusps. 4-centred open arches
over the panel tracery; colonette shafts between the bays; the middle rail is
decorated with paterae. C19 stalls with elaborate poppyheads. C19 altar rail
with trefoil headed arcading on shafts. Monuments: chancel: Sir Richard Bingham,
died 1476, and his wife Margeret; floor slab with brass effigies of a man and
woman. Dorothy Fitzherbert, died 1507; brass plate and heraldic shield within an
arched recess. Lord Edward Ridgway, second son of Thomas Earl of Londonderry,
died 1638; kneeling effigy dressed in armour within a round-headed recess
flanked by Corinthian columns on brackets; surmounted by a central achievement
of arms and other heraldic devices to left and right. Francis Willoughby, died
1665, and his wife Cassandra, died 1675; very tall and elaborate wall monument.
Outer semi-circular arched recess containing an aedicule with segmental pediment
surmounted by an achievement of arms; pilasters decorated with trailing leaves,
cartouches at the feet and skulls in the capitals; centrepiece of 3 putti with a
garlanded urn above. North aisle: Samuel and Benjamin White, died 1688 and 1685;
2 busts within a recess with curtains to the sides and segmental pediment above.
Anne Budd, died 1718; oval tablet with urn on top. Stained glass: south window
by Kempe.
(Buildings of England: Warwickshire: p355; VCH: Warwickshire: Vol IV, (1965),
pp158-160)