A Grade I Listed Building in Ludgershall, Wiltshire 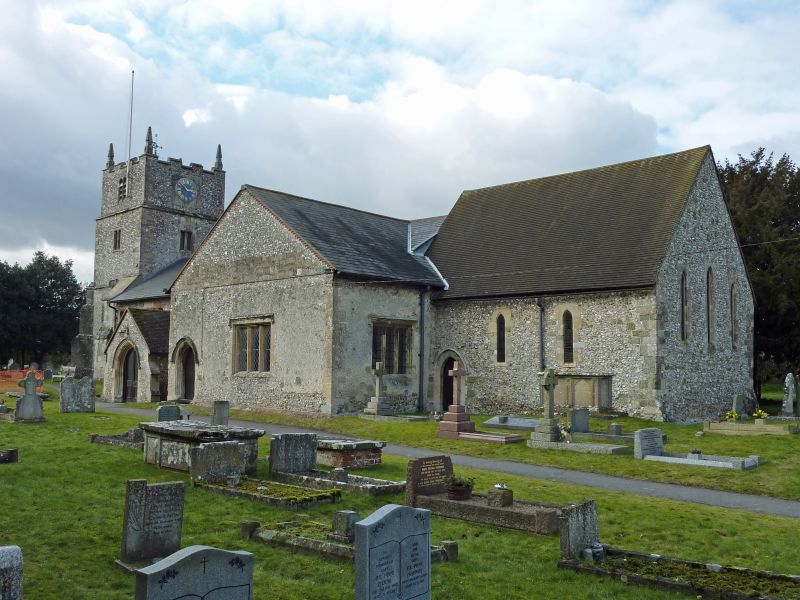 FITTINGS: Font at west end, probably
C15, limestone, octagonal on base. Pulpit: Facetted oak on stone
base. Choir stalls of 1873. FURNITURE: Williams organ in
handsome mahogany and walnut case. Bow-fronted late C18 chest of
drawers. In south chapel, Parish chest of 1693 and communion table
of same date. MONUMENTS: South chapel converted to Brydges
Chantry, 1553, with large monument set under entrance arch. Chest
tomb with slab and effigies of Sir Richard Brydges in dress armour,
and wife in black surcoat. Four-centred canopy over on fluted
bulbous Corinthian columns. Arms and flanking ornament in
spandrels. Flanking chest are tall tapered Corinthian columns
supporting entablature, with roundel supported by angels in frieze.
Arms in aedicule cresting flanked by jolly cupids. On chest, three
daughters and two sons in natural varied attitudes, one with pet dog.
Carved ornamentation on pedestals. Draped angel on soffit of arch
holding figures. An important work of the early Renaissance in
England, restored and repainted by the Pilgrim Trust. In north
chapel, two wall monuments, (a) Limestone tablet with cornice and
apron. Mid C18. Not read. (b) A C19 marble wall tablet. In
nave: A wall tablet, white marble on grey. Two slabs with arms
over, to Charles Green, died 1830, and wife and daughter. By south
door, a small section of carving said to be part of an Anglo Saxon
cross, reset in 1873.