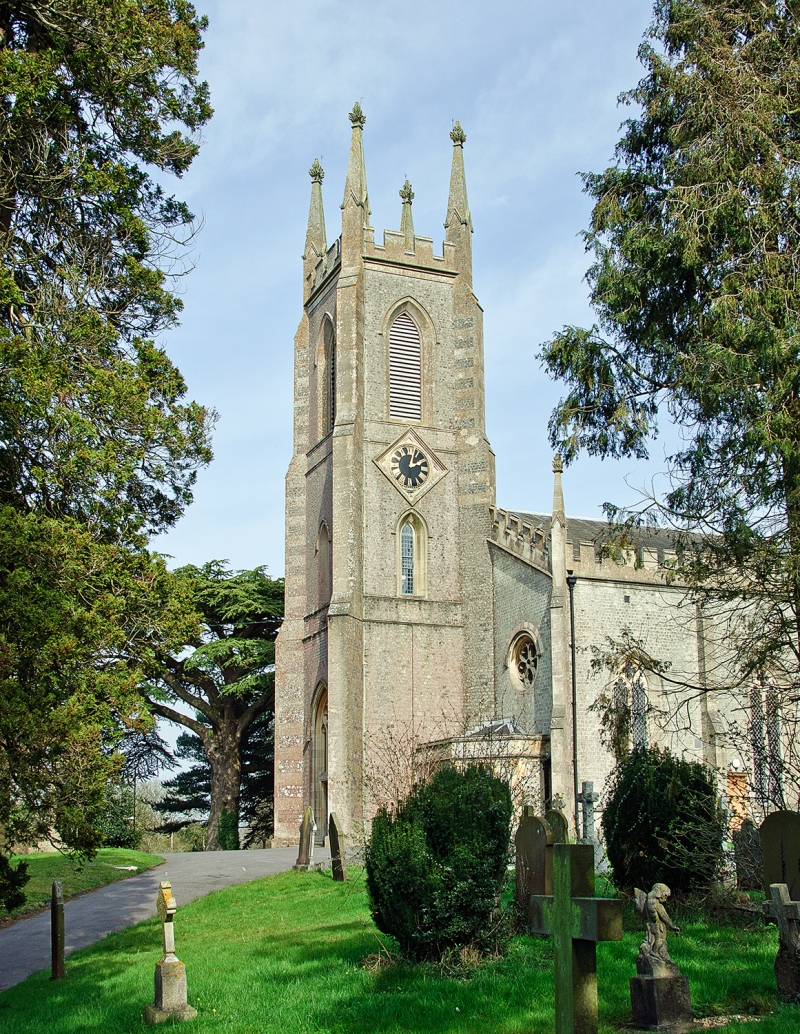 Exterior: The elegantly proportioned west tower dominates: in an E.E. style, with tall thin pinnacles, diagonal buttresses, embattled parapet, and louvred lancet bell-openings in deep splayed reveals. The middle stage has smaller lancets, and diagonally-set square frames for clock-faces north and south. The west window has Geometric Dec tracery, and a door beneath, all part of Wyatt's remodelling. Vialls added the west porches with rose windows above in the west walls of the nave. The sides of the nave have insubstantial buttresses, and tall lancets, with Perp tracery added by Wyatt. The parapets are embattled, with thin pinnacles at each bay division. By Wyatt, the enlarged east end with solid parapets. The three-light east window under a four-centred arch has rather skimpy Perp tracery. The east nave gable has a small chimney stack where the medieval Sanctus bellcote would have been.

Interior: Four-centred nave arcades with shafted piers, inserted by George Vialls in 1881 as the original unsupported roofspan had become unstable. He also renewed the nave and chancel roofs with open timber tie-beam trusses, and removed the 1830s galleries.

Principal Fixtures: In the vestibule, a painted board c. 1831, citing fees and rules for monuments in the church and churchyard; a fairly uncommon survival. The reredos is an opus sectile and mosaic panel with leaf border, depicting the Last Supper. Caen stone font, 1867, on four sturdy polished stone shafts. Elaborate late Victorian pulpit of alabaster and red marble, with a deeply undercut foliate cornice. In a reordering of 2004-5, the pitch pine benches of 1881 were replaced with carpet and moveable chairs. The western bay of the nave was also glazed to create a lobby, servery and offices, etc, with gallery above. At the same time a low chancel wall topped by a good wrought-iron and brass screen (1887) was removed except for short stubs at the sides.

History: The vicar of Warminster, William Dalby, began to hold services at a workhouse on Warminster Common in 1826. After a Methodist chapel was opened nearby in 1827 under William Daniell, Dalby redoubled his efforts to raise money for a permanent church. A public meeting settled on the present site at Sambourne, against Dalby¿s wishes. Over £2,800 was raised by subscription, and a grant of £1,676 by the Church Building Commissioners covered most of the rest. William Daniell considered that Christ Church had been erected in direct competition with his own chapel.

Thomas Henry Wyatt (1807-1880) was a member of an architecturally prolific family. He was a pupil of Philip Hardwick Wyatt, became district surveyor for Hackney in 1832 and was successfully in partnership with David Brandon 1838-51. He was honorary architect to the Salisbury Diocesan Church Building Society, which brought him many commissions, including sixteen churches built or rebuilt in Wiltshire, and numerous restorations. He was elected president of the Royal Institute of British Architects in 1870. His most famous church is Wilton, Wilts. (1841-5). In 1869 Wyatt was a proposer for the RIBA Associateship of George Vialls, who worked at Warminster after Wyatt's death, and may have been a pupil.

Reasons for Designation: The church of Christ Church, Warminster, is designated at Grade II for the following principal reasons:

* Externally a characteristic example of the thin and un-ecclesiological Gothic of c. 1830.

* The elegant tower at a busy road junction forms a local landmark.

* The local historical importance of an Anglican church built to combat the inroads of Nonconformity among the poor of Warminster Common.